Mickey is an emerging screenwriter seduced by the promise of fame and fortune. He's a hustler on the side. He is a character in Double Feature portrayed by Macaulay Culkin. 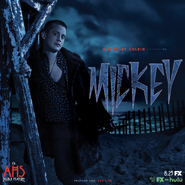