Michael Uppendahl
"Nor'easter" is the third episode of Asylum. It premiered October 31, 2012.

A violent storm hits Briarcliff Manor, allowing a group of patients to plan a daring escape. Sister Jude is haunted by her past.

Bloody Face invades the cell that Teresa is cowering in. Leo rallies to attack him, managing to wrestle the orbitoclast away and stab him in the chest. Teresa then snatches it up and makes certain the job is done. As they make their escape, they encounter a second Bloody Face. A third appears from behind them and puts a bullet in each of their heads. The two Bloody Faces remove their masks to reveal that they are brothers, Devon and Cooper. It was their friend Joey who was killed by the newlyweds. As they wonder what could have taken Leo's arm, they are shocked by the entrance of a fourth and unaffiliated Bloody Face.

Sr. Mary Eunice brings the mail to Sr. Jude, including a newspaper dated 1949 referencing missing Framingham resident Missy Stone, shown in a photograph to be Sr. Jude's hit-and-run victim. Distraught to the point of paranoia, she is kneading bread when Dr. Thredson asks her about Jed's autopsy, and she begins accusing him of planting the newspaper and gives him two weeks notice to clear out his office.

As Dr. Arden examines the microchip from Kit's neck, apparently broken into four pieces, it reassembles itself.

Sr. Mary Eunice informs the residents of the upcoming storm and the plans to comfort them with a showing of Cecil B. DeMille's The Sign of the Cross. Sr. Mary Eunice seems to taunt Sr. Jude with Communion wine and lipstick to which she attributes to Dr. Arden. The Mexican, having recognized the change in Sr. Mary Eunice, is praying in her cell when the nun enters and bids her to get on her knees to pray, then stabs her with scissors before wheeling her out to the woods as dinner for Dr. Arden's creatures.

Sr. Mary Eunice meets with Arden, telling him that the creatures are getting hungrier, and wondering what will happen when winter comes. She taunts him regarding his desire for her and makes vulgar advances, thus snuffing his interest, and he throws her out of the room.

Lana solicits the help of Dr. Thredson to pass a message to Wendy. He agrees, relishing the opportunity to supersede Sr. Jude's authority.

Grace and Shelley discuss another escape attempt. Shelley wants to flee to Paris, believing them to be more sexually liberated and tolerant.

Arden cleans his office and dresses a sofa to ride out the storm. Sr. Jude confronts him about the forbidden lipstick. Arden admits to admiring Sr. Mary Eunice's purity and innocence but believes her corrupted by patients like Shelley. Sr. Jude disagrees, asserting that it is Arden's doing and again makes paranoid accusations about an attempt to usurp her. He suggests the elder nun take a leave of absence. She leaves to pray in her office, and the telephone rings. Her hit-and-run victim speaks to her from beyond the grave. Sr. Jude apologizes, and seeing the girl's broken spectacles on the desk begins to weep. She breaks her sobriety by sampling the Communion wine, which devolves in to consuming the entire bottle. She leaves her office to start the film for the residents. An orderly reports that The Mexican is missing from her cell. Sr. Jude introduces the "first inaugural" movie night. She tries to calm the storm-frightened residents, but she is clearly drunk and breaks down in tears while reciting from Rodgers and Hammerstein's "You'll Never Walk Alone". She goes to find the missing inmate.

Thredson tells Lana that he has inquired after Wendy, finding that her door was open and Wendy absent. He expresses concern that Wendy's disappearance is the work of Bloody Face, despite the insistence of police that they have their man. Grace and Shelley, with the addition of Kit, take the opportunity to attempt their escape. Lana attempts to follow but after her betrayal in the first attempt, she must first convince Grace and the others to accept her. Shelley sacrifices herself to distract the patrolling orderly, only asking that if she is unable to join them that Lana blow the lid off the place. Sr. Jude catches a glimpse of the others as they continue on and pursues.

Arden continues to listen to the weather report, then "tarts up" a statue of the Virgin Mary with the lipstick before shouting "Whore!" and shoving it from the plinth to shatter on the floor.

The escapees can wait no longer, and leave Shelley behind to distract a guard, and exit into the storm. Dr. Thredson notices their absence. Sr. Mary Eunice is enthralled by the film, anxious for the Christians to be eaten.

Arden takes Shelley to his office, where he tries to rape her. She starts laughing at his unexpectedly small penis, and Arden knocks her out with a blunt object.

The escapees find The Mexican being eaten by the raspers outside, and retreat to the tunnel, pursued by them.

Sr. Mary Eunice wakes Sr. Jude from her drunken stupor and tells her of the escape. Sr. Jude ends the movie night early and all other future privileges due to the three escapees, who she mistakenly believes to be Shelley, The Mexican, and Pepper, as the others have returned with muddy shoes to their seats. Shelley awakens on Arden's examination table and learns that everyone else believes she escaped and that the doctor has amputated her legs above the knee. 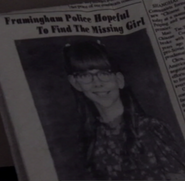