Loni Peristere
"Pale" is the second episode of Double Feature. It premiered August 25, 2021.

The Gardeners load into the car to leave Provincetown. Before he can start the engine, the pills have a sudden and powerful effect on Harry. He insists that he has to write immediately and takes his computer back into the house. Alma and Doris return to the Brown House, and Alma is concerned enough that it is throwing off her violin. She admits to her mother that she saw Harry take a drug.

In four hours of writing, Harry has completed the pilot. Doris asks him what drug he took, though he denies it. Alma comes in and confronts him as well and he snaps at her for lack of talent, which sends her running upstairs. Harry and Doris fight, and he says that she is not supporting his need to stay another day or two. She too storms off.

When his wife and daughter return, Harry apologizes. Harry ravenously tears into a sandwich and immediately wretches, thrown off by the taste of turkey. Wanting privacy so he can finish writing, he asks his family to clear the room. Determined, he writes all night and into the morning. Doris reads his screenplay off the printer, and compliments him on how good it is. She is concerned that this is abnormal behavior from him, and when he says he has no appetite for food she is upset that he lied about taking a drug. He heads to the market, passing the pale men on the street. He approaches one chewing on a rat, and the others corral around him trying to bite him. They stop when they smell him, likely recognizing the drug in his system.

The bloody steaks in the meat market draw Harry's attention. He loads several into his cart, noticed by Mikey. The storekeeper muses that Harry's creative flow must have begun. Karen has noticed, too, and confronts Harry about taking the pill. She says "you never knew thirsty before now" and walks away.

Alma and Doris discuss leaving. They both want to, but Doris also wants to be supportive of his inspiration. Alma reminds her mother that Harry is being mean to him, but that they can tough it out for a few more days. Alma wonders if she would be able to play the violin better if she took a black pill, but Doris insists there is no magic pill for greatness.

One Alma is in bed, Doris descends the stairs to approach Harry, but she backs off when she sees him still writing. Outside, Austin and Belle Noir exchange knowing conversation about the first days on "Muse", the term Austin calls the black pills. Belle admits that if Harry is going to keep up the pace, he will need to upgrade his diet. The pair resolve to head up the cape for a snack.

The next day, Doris cuts up vegetables for a soup. Harry enters the kitchen and has still not slept. He wants to stay another week, but Doris is not having it. Angry, she cuts her finger with the chopping knife. On reflex, Harry pounces on her hands, sucking away the blood. She throws him off, as he's hurting her. He stares at her, blood dripping across his chin.

Austin drives birds away from his property with a shotgun blast. Harry drives up, and demands of Austin to know what was in the pills. Austin says only The Chemist knows. He relates that the town used to have a succession of drug problems, starting with heroin and crystal meth, which developed into a mystery designer drug. The drug only works for those with a creative spark; those without become "flesh phantoms" that have been hunting around town. The "Muse" depletes the major minerals in the bloodstream, which have to be replenished in massive amounts. Eventually, the meat market will no longer satisfy those needs and the user will need fresh blood —from humans. Once the user stops taking the drug, they will return to normal but will never be creative to the same level.

Harry once again returns and apologizes, saying that they can leave the next morning. Doris reminds him that she has a job to do here, too, and that she won a contest for the opportunity. She fears he doesn't think she is good enough. They are interrupted by a call from Ursula with good news: not only is the studio immediately greenlighting the pilot, but Joaquin Phoenix saw it and signed onto the project on the spot. Further, Netflix wants to make an overall deal with them. Ursula suggests the Gardeners start looking at real estate options. Ecstatic, they want to celebrate and Harry distractedly sits down to work. He finds he can not write a word.

He drives to Austin's, looking for more Muse. Belle Noir is there, and they convince Harry to take another dose. She insists that he will not be able to stop now that he has had a taste. Then they say they are going out to eat, and the two eccentric locals reveal their pointed teeth.

On the drive to their destination, Harry calls to apologize to a disappointed Doris that he's been invited into a prestigious writers' group. He asks how many creatives are on the drug ("a few") and why there are more recently ("streamers"). The local duo also explains that they only do "Muse" seasonally, and that they only need to feed on blood ("4-6 pints worth") weekly while on the drug. They choose victims who will not be missed and exsanguinate them completely, mostly from addicts clearly selling stolen goods on Craigslist. The two rules are to never feed in Provincetown (because of the new police Chief's curiosity) and never take the gloves off.

Elsewhere, Karen is staying with Mickey, who explains his own house rules. Mickey also explains his theories on Jaws' shark-driven motivations while they get high. Mickey mentions that he loves movies and has started several screenplays of his own. He says that he stole some Muse off of Sarah and offers them to Karen, but Karen explains the pills' effects. She insists that even living as she does, she'd rather be like that than live like Sarah. Mickey points out that they are both creative, as he has purchased several of Karen's paintings from a thrift shop. The evocative paintings are talented crafts. They muse about what they would do with fame and fortune, but Karen quickly admits that she could not do what's entailed. Mickey says he can, and takes a pill in front of her.

The trio of writers arrive at the seller's house. Once inside, Belle Noir slashes his throat and they quickly feed on the man. Harry is ashamed, but Sarah tries to rationalize that the addict was a burden to society. They also acknowledge that they are experiencing a second-hand high from the meth in the addict's system. They say they should get Harry to Dr Feldman to take care of his teeth.

Later, Harry visits dentist Leslie Feldman (aka Lark) at her tattoo shop. Her Muse experience made her a skilled tattoo artist after dental school. She designed the caps that will cover his new teeth after they are filed to pickets, with the rationale that he will have to murder fewer people with the cleaner feeding that the new teeth will provide. After all, she says, all predatory species have them.

Alma is frustrated that she can not master the challenging violin pieces she is trying. While Doris is not watching, Alma rifles through Harry's bag and takes a Muse pill. Almost immediately, her skill skyrockets. Meanwhile, we see Mickey and Harry thriving in their creative flows and Doris struggling to master tone-on-tone interior design. Alma collapses after a challenging piece, which wakes Doris. Doris is pale and tired, and asks Alma to stop her non-stop practice. Alma declines, saying that she must master the piece; she goes on that Doris will never understand greatness like Alma and her father will, because Doris is content being mediocre. Doris notes Alma's atypical cruelty, but Alma retorts that Doris is jealous because she does not understand art or inspiration. Alma finishes by saying she feels at home there now and never wants to leave. Doris angrily sends Alma to her room to pack for leaving the next day.

Harry runs along the beach and encounters a hustler under the pier, whom he quickly dispatches.

Doris awakens to find Alma has left her violin at Doris' bedside and is missing. Confused, she asks Harry if she has seen Alma, and if that is blood on his chin. Her husband responds that she went for a walk to get fresh air. Doris is furious that Harry allowed their daughter to go out alone with the dangerous pale men lurking in town. Harry says she is being irrational (blaming it on her pregnancy), but Doris counters that it is not irrational when they have been attacked in the last few days, including Harry killing an intruder. Doris says that she will find Alma and the two will leave without Harry. Doris searches the streets calling for Alma, finding her daughter in the cemetery eating a freshly killed rabbit. 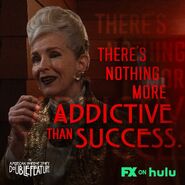