Patrick is the former owner, along with his boyfriend, Chad Warwick, of the Murder House. He is a character in the first season (dubbed by fans "Murder House") portrayed by Teddy Sears.

Chad later has another suspicion, thinking Patrick was having an affair with his trainer at the gym. Patrick admits to it, and he and Chad have a bit of a falling out. Patrick argues that he cheats because he felt there was nothing special in their relationship anymore. After Patrick leaves, the Rubber Man appears and murders Chad, with Patrick coming in moments later and becoming the next victim. Tate Langdon would then arrange the bodies to look like a murder-suicide.[2]

Patrick is a very attractive and flirty young man. He is currently in a relationship with Chad but mentions he used to be straight, so he may be bisexual. He seems to have issues committing to Chad, as he cheated on Chad when he was still alive and tried to cheat on him again with Ben. He later asks not to tell Chad of his propositioning him, so it is to be assumed that Patrick does care about Chad. However, previous to his encounter with Ben, Patrick proceeds to leave the house on Halloween on a sexual conquest. When he gets back, he apologizes to Chad, but it never seems like he is actually genuinely sorry. When he apologizes, it seems less out of regret, and more so he won't have to hear about it later.

After Marcy hires fluffers to fix up the house for the Harmons, Ben and Vivien encounter Chad and Patrick on the front lawn. Believing the two are the fluffers, they invite them inside, where Chad sets about decorating the house in a similar fashion as to how he was decorating at the time of his death. He and Patrick still have tension between them. When Ben injures himself cutting pumpkins, Patrick (an EMT), takes him upstairs to fix the wound. After, he offers to perform oral sex on Ben, though he is rebuffed. He then somberly apologizes to Ben and asks that he not tell Chad.

Later, Chad begins having a meltdown over Ben and Vivien's sub-par costumes and the fact that they didn't purchase the right apples for the bobbing station. Reaching his boiling point, he demands that the two leave the house. When they refuse, pointing out that it's their house, Chad ominously responds, "It's not your house. We know it, you know it... And the house knows it." Vivien then starts screaming for Chad and Patrick to leave. They likewise refuse, but Patrick begins to lead Chad away when they notice the Rubber Man stalking outside the nearby windows.

Later that night, as the chaos surrounding Hayden's break-in was unfolding, Vivien sees Chad smashing the decorations in the front lawn. She confronts him, where he blames her for ruining his Halloween and says Patrick left to go to a bar, which upsets him more as he claims that all he wanted was to spend Halloween with him. At the conclusion of Halloween night, he re-enters the Murder House. He apologizes to Chad, who refuses to talk to him.[3]

Violet discovers that Patrick and Chad plot to kidnap both of the Harmon's newborn twins and raise them as their own. Violet and Constance conspire to rid their spirits from the house for good by performing a pagan ritual that involves destroying one of their close possessions. In an attempt to steal his ring, Tate tries to seduce Patrick, but he instead beats him up for murdering him. He then reveals that he was planning on moving in with his new lover before his death. And that he will now have to spend eternity with someone he doesn't love. Chad overhears this revelation and decides against taking the babies.[4] 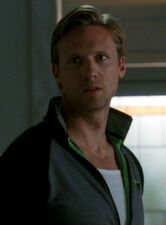 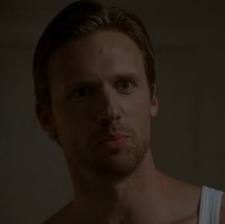 Chad and Patrick refuse to leave the Murder House (Nor can they).

Chad and Patrick inform Violet they are taking the babies.