Pepper is a microcephalic woman and former performer with Fräulein Elsa's Cabinet of Curiosities who has been committed to Briarcliff Manor. She is a character in American Horror Story portrayed by Naomi Grossman. She appears first in Asylum, and earlier in life in Freak Show.

Pepper was abandoned by her family into the inept care of an orphanage when she was born. When she was eighteen years old, she was rescued by Elsa Mars, thereby becoming the first member of Fräulein Elsa's Cabinet of Curiosities. As the troupe grew, she would form a maternal relationship with the dwarf Ma Petite and an innocent romance with fellow "pinhead" Salty, to whom she was informally married in a mock ceremony.[2]

Despite her alleged history of infanticide, she was innocently playful and kind-hearted. She usually wore a flowery muumuu and a girlish bow in the topknot adorning her misshapen mostly bald head. Upon being abducted by aliens, she was given a highly intelligent, confident, forceful and sharply observant personality, who was unafraid to mock and threaten Dr. Arden when he threatened to mutilate Grace, and also correctly accused Oliver Thredson of being evil to his face.

Pepper's role as a performer was a sort of clown act with Salty, providing amusement through innocent dance and play. Her extended role was as an attendant to "Miss Elsa", providing manicures[3] and delivering messages.[4] During a visit from Edward Mordrake on Halloween, she was deemed innocent by the ghost's demon face and she was passed over for "collection".[5]

Upon the death of Salty, she became despondent and unwilling to perform, so Elsa took her to live with her sister, Rita Gayheart. There, she was treated with utter disdain by her sister and brother-in-law, Larry. She was tasked with serving cocktails to her sister and caring for her disfigured and equally unwanted infant nephew, Lucas. With his wife's complicity, Larry killed the child and framed Pepper for the crime. She was convicted of murder and consigned to the asylum at Briarcliff Manor, where she was admitted by Sister Mary Eunice. The nun took her on as a rehabilitation project and entrusted Pepper with custodial duties in the manor's library.[2]

Pepper spent most of her years at the asylum a model inmate, only guilty of pestering visitors to play[6] and hoarding food in her cell.[7] On the night of a massive storm, Pepper excuses herself from the movie night to pee and did not return. Sister Jude mistakenly assumed that she was a casualty of the failed escape of Lana, Grace, and Kit.[8]

In reality, she was abducted by extraterrestrials, who performed genetic alterations that upgraded her subnormal intelligence to genius level. She was returned to the asylum to act as guardian to pregnant and resurrected fellow abductee, Grace. She defends Grace from the experiments Dr Arden tried to perform, stating the extraterrestrials have protected her from harm, as shown when Arden's scalpel is telekinetically flung from his hand. Pepper reveals that the extraterrestrials do not like Arden and mock his experiments, and that if Grace is harmed in any way, the extraterrestrials will abduct him and "stir his brain with a fork".[9] Pepper tried to carry out her charge of protecting Grace bravely against Oliver Thredson, pointing at him and saying she knows what he is up to and he doesn't fool her one second, but the effort to protect Grace was futile as he had her taken away by orderlies.[10] Pepper befriends a defrocked and committed Sister Jude who is in the asylum as a patient, becoming Jude's closest friend. However, when Jude began suffering from delusions, it is revealed that Jude has been imagining Pepper being her friend, and that Pepper died two years ago from pulmonary fibrosis.

Rita Gayheart is the sister of Pepper. Despondent after the loss of Salty and no longer willing to perform, Pepper was taken by Elsa to live with Rita. Rita made excuses that her husband would not allow it but Elsa convinced her to stand up to him and do the right thing by family. Unwilling to admit her own reluctance, Rita agreed. After Rita gave birth to a deformed child, she treated Pepper as a house slave whose duties were making her cocktails and caring for her otherwise unloved baby. She and her husband, wanting to return to a life of leisure, hatched a plan to get rid of both of them by killing the baby and blaming Pepper.[2] 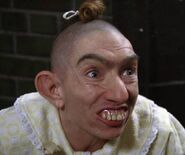