Sarah Paulson
"Return to Murder House" is the sixth episode of Apocalypse. It premiered on October 17, 2018.[1]

Behold and Madison are sent on a mission to Murder House to uncover the truth about Michael Langdon's past. Although revelations about their next Supreme paint a bleak picture - there may be room to set some things right.[2]

Madison and Behold arrive at the Murder House after successfully purchasing the house as a regular straight couple named Mr. and Mrs. James. Upon entering, the pair performs a ritual to force the ghosts out of hiding. After it is complete, the ghost of Gladys walks past the doorway, confirming that it did in fact work. They also witness a pair of young girls, who appear to be on fire, running down the stairs.

Downstairs, Tate Langdon vents to Ben Harmon about their therapy sessions and how he needs his help to get Violet to talk to him, as she constantly ignores him. Ben reminds Tate of his past mistakes and how they're valid enough to make Violet choose to ignore him. Behold and Madison interrupt the session much to the shock of Ben and Tate, as the ghosts cannot be seen unless they choose to be. Madison explains that they came to the house to ask the residents questions concerning Michael. Tate warns the witches that they've made a mistake coming to the house.

A red ball rolls down the stairs and after Madison picks it up, she is attacked by Beauregard Langdon who wants to play. As Behold is about to use magic to save her, he is stopped by Billie Dean Howard who manages to distract Beau by throwing his ball. She explains that she's a friend of the house and its residents. A voice can be heard coming down the stairs which is revealed to be Constance Langdon.

Madison and Behold tell Constance that they have come to Murder House to learn about Michael. Constance makes a deal with them: if they get rid of Moira, she'll tell them all about Michael. Madison has Behold tear down the gazebo to dig up Moira's bones. While digging, Behold hits the skull of Hayden and gives it to Madison, who states that the skull couldn't be Moira's because it has a different aura. Later, they take the collection of limbs to Moira and she hugs Madison in gratitude. Moira wants to be buried at the same cemetery that her mother Molly is buried in. Madison and Behold fulfill her wish. Moira reunites with her mother's ghost and confesses to her that she killed her, asking for forgiveness but Molly thanks her daughter for putting an end to her agony. They both state that they have finally found peace and move on together.

The two witches sit with Constance in the kitchen as she recounts her story. She starts from the beginning. After Vivien gave birth, Constance took Michael from the house and raised him as her own son, believing she had been given a new chance at being a mother after the death of her four children. Shortly, however, she began noticing violent psychopathic tendencies in Michael, beginning with the killing of small animals to eventually murdering his nanny at the age of three. One day, she entered Michael's bedroom to discover he had aged ten years overnight and now had the appearance of a teenager. When Michael tried to strangle Constance in her sleep, she consulted the help of a priest, only for him to be murdered by Michael. With her dreams of motherhood shattered, Constance returned to the Murder House and committed suicide by overdose. With that said, Constance stands and walks away with her daughter, Rose.

Behold and Madison approach Ben, who no longer speaks to his wife Vivien and frequently spends his time masturbating while crying. Ben tells the two that after Michael discovered that Constance had killed herself to be free from him, he attended therapy sessions with Ben. A father-son relationship developed between the two. However, Michael slowly grew more and more dark after meeting and being rejected by Tate. Ben witnessed Michael mutilating the ghost of Elizabeth Short, as well as not only murdering two new residents, but permanently expelling their spirits from existence. Ben, realizing Michael's capacity for evil, ended their sessions.

The ghost of Vivien Harmon appears and reconciles with Ben, explaining that she could not forgive him for connecting with Michael, realizing now that he didn't have a choice. She reveals to Behold and Madison Michael's true nature, reciting a passage from the Book of Revelation about the Beast from the Sea.

One night, as Vivien explains, a group of Satanists arrived at the house, consisting of Miriam Mead and another cardinal (Naomi Grossman) and headed by Church of Satan founder, Anton LaVey, who had faked his death in order to meet Michael. The Satanists kidnapped a young woman from a bus stop and brought her to the house where they performed a Black Mass, with LaVey removing the girl's heart for Michael to consume. A demonic shadow appeared and Michael announced that he is one with his "Father." After a rain of blood and hail descended, Vivien attempted to murder Michael but suddenly caught on fire. Before he could destroy her, she was saved by Tate, allowing Michael to leave the house. Vivien tells Behold and Madison that Michael Langdon is not a warlock but the Antichrist, the prophesied abomination that will bring about the Apocalypse.

Madison and Behold pack up. Madison must tell the council what they've learned. Behold says that he never would've backed Michael if he knew what he truly was. As they leave, Madison spots Violet crying in the hallway. She talks to Violet about Tate and reveals to her that Tate saved Vivien. After she leaves, Violet calls for Tate and they embrace. Outside, Behold calls Madison a softy. She says at least someone got a happy ending. Behold claims that there won't be one unless they find a way to stop Michael.

They get into a black car and, as they leave, Madison telekinetically closes the iron gate.

Rose Langdon is a character in Apocalypse portrayed by Raina Matheson.

While Constance was disclosing Michael's story to Behold and Madison, Rose came into the kitchen and reminded her mother that it was almost tea time. Constance softly apologized for being forgetful and walked away with her daughter.

It is possible that Rose was either born without eyes or had them gouged out via unknown means at some point, resulting in her death from blood loss and/or infection. Given that Constance stated in Murder House that all of her children with the exception of Tate were born with maladies, it is plausible that Rose never had eyes to begin with and may have died as a result of this deformity.

Grace is a character in Apocalypse portrayed by Stacy Highsmith.

In a flashback narrated by Ben, it is shown that Elizabeth and her wife Grace were the new owners of the Murder House, however, not long after moving in, Michael Langdon stabbed them in a fit of rage, binding their souls to the house. He then incinerated the women's souls and made them cease to exist. This was later reversed when Mallory went back in time and killed Michael before he met Grace and Elizabeth.

Elizabeth is a character in Apocalypse portrayed by Jennifer Jalene.

In a flashback narrated by Ben, it is shown that Elizabeth and her wife Grace were the new owners of the Murder House, however, not long after moving in, Michael Langdon stabbed them in a fit of rage, binding their souls to the house. He then incinerated the women's souls and made them cease to exist. This was later reversed when Mallory went back in time and killed Michael before he met Grace and Elizabeth.

Samantha Crowe is a character in Apocalypse portrayed by Naomi Grossman.

Samantha Crowe was with Anton and Miriam when they met Michael on a stormy night. Samantha later stabs an innocent girl during a human sacrifice. Samantha was presumably killed during the nuclear holocaust but was brought back by Mallory using Tempus Infinituum. Later on, Samantha is seen with Miriam and Anton at Emily and Timothy's house looking at their new savior, Devan Campbell.

Anton LaVey is a character in Apocalypse portrayed by Carlo Rota. He is the Black Pope and the founder of the Church of Satan.

Anton is first seen with Miriam and Samantha at the Murder House. They have a human sacrifice in honor of Michael. Later on, when Michael is in the forest he has a vision of Anton. Anton presumably died during the nuclear holocaust but was brought back by Mallory using Tempus Infinituum. Anton is last seen with Miriam and Samantha looking at their new savior, Devan Campbell. 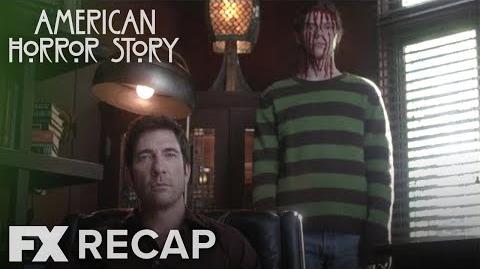 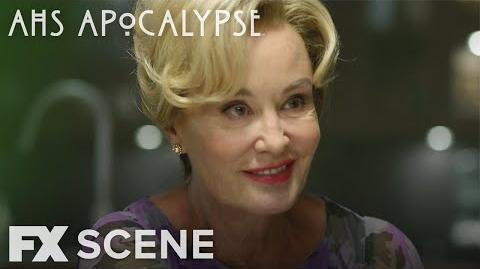 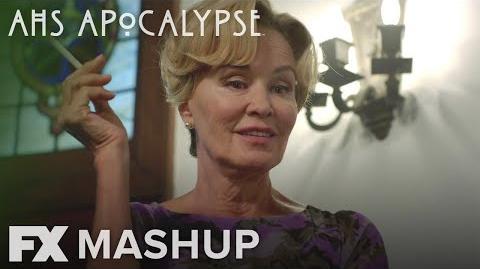 Retrieved from "https://americanhorrorstory.fandom.com/wiki/Return_to_Murder_House?oldid=145918"
Community content is available under CC-BY-SA unless otherwise noted.