View source
This article is about the entity / identity. For the episode, see Rubber Man (episode).

Although the suit was not used by Chad and Patrick, Tate Langdon made good use of it. As Chad and Patrick's relationship issues deepened, Tate realized that they were unlikely to adopt a child. Because he promised Nora a baby, Tate took it upon himself to murder both Chad and Patrick, hoping that the next residents would help him make good on his word. Donning the rubber suit, Tate drowned Chad and beat Patrick with a fire poker, later setting up the murders to look like the couple was involved in a murder-suicide.[1]

Shortly after moving into the house, the Harmons discovered the suit in the attic, after which it was disposed of by Ben.[2] However, Tate retrieved it from the trash outside and took advantage of the opportunity to fulfill his promise to Nora. While Ben was sleepwalking, Tate, dressed as Rubber Man, entered the bedroom and raped Vivien, who believed Tate to be her husband.[3]

On Halloween, Vivien hired interior decorators, who turned out to be the spirits of Chad and Patrick. Tate, again under the guise of Rubber Man, stalked the three from outside. When Vivien realized the house was haunted and planned to leave with Violet, Tate donned the suit once again to get rid of her. As Rubber Man, he and Hayden appeared to Vivien. He assaulted her but disappeared when Ben and Luke came up the stairs.[4]

When Tate got wind of Ben's plan to send Violet to boarding school, he returned to his alter-ego to knock Ben out. The two got into a fight, but Tate was able to use chloroform to render him unconscious. Moments before passing out, Ben was able to unzip the mask, discovering the Rubber Man's identity.[5]

Following Ben Harmon's death, a new family, the Ramos, moved into the Murder House. In hopes of preventing the same tragedies, the Harmons and other benevolent ghosts conspired to scare the Ramos out of the house. Ben donned the Rubber Suit and tried to scare off Stacy Ramos, chasing her through the house and into the basement. Towards the end of the haunting Vivien stabs Ben as a final fright to the Ramos thus destroying the suit and encouraging the family to flee the property.[6]

While staying at the Murder House, Michael begins bonding with Ben Harmon and becomes like the son he never had. Eventually a new couple moves into the house, in which Michael viciously murders them while donning the Rubber Man costume.[7]

Michael arrives at Outpost 3 and uses a satanic ritual to conjure and animate the Rubber Man. It is seen spying on Timothy Campbell and Emily from the ceiling and has sex with Mr. Gallant, the latter whom stabs the Rubber Man repeatedly believing him to be Michael, but was actually his grandmother whom he had stabbed to death because of an illusion set upon him by Michael.[8]

Scarlett, a new resident of the Murder House in 2021, finds Rubber Man suit in a closet, she is very interested in this and takes it back to her room and quickly dresses in it, admiring the effect in the mirror. Blackened eyes glare back at her, and she quickly tosses it in the outside garbage can. Later, the Rubber Man suit is appeared once again, and she quickly dresses. As she finished dressing, her eyes blacken. She enters her fathers' bedroom with a kitchen knife in hand. This terrifies her parents until she takes off the hood. They demand she get rid of it, and she reflexively slashes Troy's arm.

Scarlett decided to commit suicide after being shamed by four students, and she warned them to come her house, or she will do it. The Rubber Man suit is next to her on her bed. The four students enter the Murder House through the open door. Scarlett texts the four to come down to the basement, and she killed the students while wearing the Rubber Man suit.

Scarlett has called during extended-family breakfast with some news, Scarlett has found Ruby's "uncle" Tony, and Rubber Woman is going to ensure it is his last day on Earth.[9] 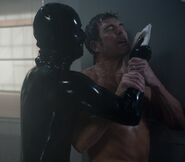 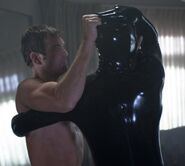 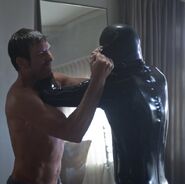 Tate is revealed as the man inside the suit. 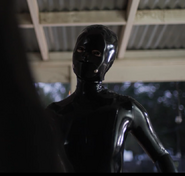