watch 01:12
The Loop (TV)
Do you like this video?
This article is about the episode. For the entity, see Rubber Man.

The man in the rubber suit is unmasked, while Vivien begins to question her sanity.

As the Harmons move in, Nora is distraught that someone has changed her house. She collapses into a chair and starts to weep for her baby as a man comforts her. He approaches the house trash can and retrieves the rubber suit that Ben had thrown away and Rubber Man and Vivien have sex. Afterward, Ben returns to the bedroom, passing Rubber man on the stairs, and both Vivien and Ben in a daze tell each other they love the other. In the bathroom, Rubber Man takes off the suit to reveal himself as Tate, who was trying to get Vivien pregnant so that Nora can have a baby.

Vivien, Moira, and Marcy are talking in the kitchen about Nora. Moira and Marcy try to explain it rationally, but Vivien is convinced someone is trying to make her feel like she's crazy. Marcy tells Vivien that her cousin Helen became paranoid when she was pregnant and leaves to speak to Mr. Escandarian, unaware he is dead.

He later tries to seduce Patrick while wearing the suit, but an annoyed Patrick tells him to take it off. Chad calls him an asshole and confronts him about the BDSM chatroom and says he thought Patrick wanted to start a family in the house. Angry, Chad tells him to leave, and live with the man he has been seeing in a motel room. Patrick tells him that Chad won't have anything to threaten him with much longer, as he has seen their bills and knows they are going to lose the house. He leaves the room and Chad sits down on the bed, sobbing.

Hayden confronts Nora who's crying and tells her how it's annoying her, then begins to comfort her, explaining that there are other ghosts trapped in the house. Nora refuses to believe she's dead, but Hayden shows her the bullet hole in the back of Nora's head. Hayden and Nora relate over their lost children, and Hayden suggests they take Vivien's babies, unaware that was Tates intention.

Vivien is washing up in the bathroom and hears a sound in the hall outside her bedroom. While investigating, the red ball rolls down the hall and Vivien picks it up. The lights blow out and Hayden, behind Vivien, laughs and shatters a vase. Another vase falls and a dresser rushes towards Vivien, forcing her to retreat to the bathroom, where she sees the Rubber Man mask on the sink.

Tate dons the Rubber Man suit, before to drowning Chad in the bobbing apple barrel and snapping his neck.. Patrick, dressed as a cowboy, comes upon the Rubber Man and his murdered lover but Tate/Rubber Man proceeds to grab Patrick, hurling him against the table bludgeoning him before grabbing a fireplace rod to beat him. He then proceeds to murder Patrick by sodomising him with the rod. Nora appears in the basement looking over the gunshot wound on Patrick's head when Tate comes behind her, comforting her and telling her he knows she has suffered a long time, and that he killed them because they decided not to have a baby. He ensures her that he will help her get a baby.

Violet, confronting her fears, goes to the basement to play with Beauregard. Ben finds her downstairs and asks who she is talking to. Violet lies and says "No one". The two go up to Ben's office, where they have a father-daughter talk. Ben tells Violet he has been informed that she has not been at the school for the last two weeks and asks her why she's missing classes. Violet argues that it's boring and they bully her and then points out that his wife is acting weird as well. Ben tries to psychoanalyze her, but Violet snaps at him, telling him it is his fault.

The scene moves to Moira and Vivien, who are talking and Vivien says she believes her pregnancy pain medication caused her to hallucinate Nora. She tells her about a book called "The Yellow Wallpaper", about a woman who is locked in the attic for a slight hysterical tendency. Being trapped there, day after day, the woman begins to hallucinate that there are women trapped in the pattern of the wallpaper and scrapes it all off.  When her husband returns, he finds her whispering "I finally got out of here" to the wallpaper. Moira continues to tell Vivien that men will always find reasons to lock women away and tells Vivien that she is not crazy, and the things in the house are really happening and that the house is possessed. She finally tells Vivien that she should leave the house.

Vivien wakes Violet and tells her they're leaving the house. A tearful Tate sees them leaving, but does nothing as they walk away. They get in the car, but the ghosts of Fiona and Dallas are in the back seat, and scare them from the car causing them to run back into the house.

Ben confronts Vivien for trying to take Violet away from him. Vivien tells him the home invaders were here, but Ben doesn't believe her, as the police found no evidence and they argue over what he believes is unexplained erattic behaviour as he is aware of her eating raw organs. Vivien reassures him that Violet saw Fiona and Dallas in the car too.

Violet and Tate have sex and Tate reassures Violet that he'll always be with her. Violet asks if the others will be too but Tate tells her that they can't hurt her. Violet asks him if the home invaders are dead, too. He tells her they are only trying to scare her and that she can't tell anyone, because they'll think she's crazy and send her away.

Ben and Vivien continue arguing about leaving the house, Vivien's mental health and Hayden. Vivien throws the rubber mask at Ben, asking if he wore it on Hayden too, but he denies ever wearing it. Violet lies about what she saw the previous night, saying she confirmed her mother's story to the police because it was what her mother wanted.

Hayden tells Tate that Vivien has booked plane tickets and that he knows what he has to do. Tate acknowledges she's right, and she tries to seduce him before he rapes Vivien. Tate refuses her advances, saying that he is in love. She tells him what he is about to will be difficult, and he has to prepare himself.

Vivien confronts Marcy about Joe, but as they are arguing, Vivien fakes sickness, and Marcy rushes to get her a drink of water. Vivien steals Marcy's gun from her purse before she returns, and then tells her she isn't feeling well and that she's going to lay down before Marcy leaves.

Vivien goes to bed, checking around her room before she sleeps, and finds herself seeing the Rubber Man in the dark, now realising it was not Ben in the suit. She gets back up to investigate and the Rubber Man passes behind her before grabbing her. Vivien screams, and he releases her, and she stumbles back to the bed. She grabs Marcy's gun as someone comes in, shooting him believing it to the Rubber Man, but it is Ben.

Vivien is suffering from hallucinations of the Rubber Man attacking and Hayden trying to take her babies. Ben and Luke hold her down and try to calm her as she insists her rapist and Hayden are in the house. Violet ushers in two police officers who take her to a psych ward.

Ben leaves to go to the hospital with Vivien, leaving Tate and Violet alone in the house. Tate assures Violet that he will be there for her.

Tate is in the process of dragging the bodies into the basement when Moira interrupts him. Chad is still alive and tries to reach for Patrick so Moira gives Tate a gun, and he stages the scene to make it look like a murder/suicide by shooting Patrick several times before making Chad hold the gun and shoot himself in the heart.

Peggy is a supportive friend of Chad's and a lesbian[1]. She is portrayed by Kathleen Rose Perkins.

Gary is a British salesclerk at the S&M shop where Chad buys the rubber suit. He is portrayed by Richard Short.

Add a photo to this gallery
Videos 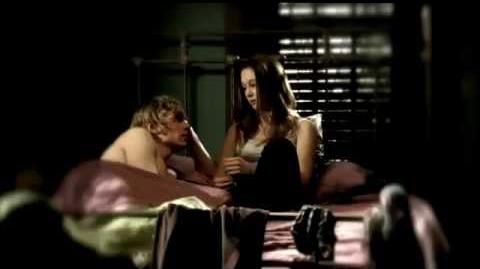 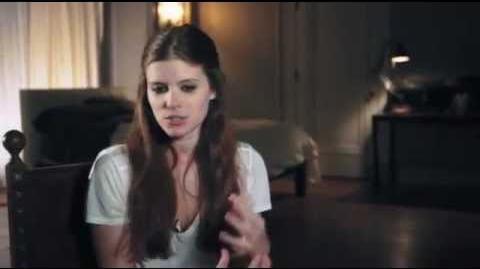 The Making of Rubber Man
Making Of

Retrieved from "https://americanhorrorstory.fandom.com/wiki/Rubber_Man_(episode)?oldid=150458"
Community content is available under CC-BY-SA unless otherwise noted.