View source
watch 02:13
Who is Sally McKenna?
Do you like this video?
Play Sound

Sally McKenna (better known as Hypodermic Sally) is a ghost junkie who has been permanently residing at the Hotel Cortez ever since she was murdered in 1994. She is a character in Hotel portrayed by Sarah Paulson. When she was introduced to modern life and technology by Iris, she renovated her afterlife, becoming a successful blogger.

Little is known about Sally before her arrival at the Hotel Cortez except that she was a drug dealer who sold heroin to Donovan. While sitting at the Blue Parrot Lounge, Sally reveals to John that she was making music with Patti Smith in the 1980s, who ultimately fired her from the project. Sally goes on to describe how she became lost in heroin. It is indicated this is where her addiction began and abandonment issues were enhanced. Sally reveals to Elizabeth that she was a 'Valley girl' and the boy she gave his first-hand job, grew up to become a major drug dealer. Sally sold drugs for him. It is highly possible that Sally had a lot of family problems growing up, citing her intense abandonment issues during the show, her past tales of being in a relationship with a drug dealer and her dark fantasies of being together with a partner. In 1993, she was a songwriter during the grunge period and had a threesome one night with her friends, a couple of musicians. Sally injected all of them with heroin and in a bizarre drug-induced psychosis, developed the idea to sew all of them together. Her friends died in the process. The ghost of Hazel observed her and left her to be tortured by the Addiction Demon for three days, whilst lying trapped next to the corpse of her friends. Sally eventually broke free and continuously returned to the hotel because it was the only place where she felt needed. In 1994, she brought Donovan to Room 64 to shoot up, and after injecting himself with Sally's dirty needle, he died of an overdose, much to Sally's indifference. Shortly after, the pair was found by Iris, who had followed them into the hotel after growing concerned for Donovan's well-being. Despite Iris's anguish, Sally showed no remorse for her actions and casually left Room 64. Still delirious from the heroin, she exited the room and stopped to look out an open window, where she was suddenly pushed out by Iris and killed after plummeting several stories into the alley.

Sally is incredibly disturbed and unstable both mentally and emotionally. She is wildly desperate for affection and often uses emotionally manipulative methods to receive it from the male hotel visitors, a process that is effective given her mysterious and persuasive nature. However, she frequently wanders alone through the halls aimlessly and is often seen with a cigarette in hand and fresh tears on her face. Sally is also quite mischievous, most notably towards Iris due to their troublesome history together. This is exemplified most frequently when she disrupts Iris's task of harvesting blood for Elizabeth. Sally is also prone to disruptive and emotional outbursts when she is denounced by her disheveled appearance, especially when she is compared to the other high-brow guests. She considers the Hotel Cortez her home.

Sally can be frequently seen with the appearance that she died in, consisting of a cheetah print coat over a velvet purple mini-dress. She accessorizes with a black choker with a cameo attached to it, torn fishnet stockings, and high-heel pumps. She wears dark makeup (which is often smeared by tears) and her hair is cut in a way that is reminiscent of the time period in which she died. She has notable markings on her collarbone, which appear to be a result of her death, as well as other injuries such as scars on her arms caused by her frequent drug use.

Presently, she resides within the hotel, taunting Iris and other guests. In Room 64, she works in tandem with The Addiction Demon to torment the addict Gabriel, promising that it will end if he just says "I love you, Sally." After chastising Iris for her lack of compassion for the Scandinavian prisoners, she mischievously releases Vendela from her cage and puts Iris in hot water with Elizabeth.[1]

After smoking a cigarette, Sally starts sewing Gabriel into a mattress in one of the rooms of the hotel. After kissing him goodbye, he wakes up and begs her to get him out, but she puts him down instead. While doing the last stitches, she hears screaming through the air vents. She goes to the dungeon and finds the Countess' kids drinking Agnetha's blood under Iris' supervision. She is screaming for help and Sally reminds Iris that there's a cop staying at the hotel but soon Agnetha is exhausted and dies.

When John shows up at the bar after a vision of his son Holden, she asks him to tell her about his last drunk. They drink together and share memories. Sally tries to get an invite for Will Drake's fashion show at the Cortez but she is thrown out. She then sees John's daughter and is strangely surprised. When Scarlett comes back to the hotel, she sees Sally in one of the hallways breaking her rotten teeth and her mouth starts bleeding.

While dying in the hospital, Gabriel tells John that he meant to kill Sally and not her (meaning Claudia). Looking for any clues that he may find, he goes to the hotel and finds her. He asks her about her junkie friends but she doesn't say anything that he might find as an evidence that she is the Ten Commandments Killer or related to him of any kind. However, he arrests her after trying to edit one of the commandments which he finds offensive and disrespectful. While going down in the elevator, Sally seduces him and massages his penis. Then The Addiction Demon appears and the lights go off and on and she disappears.

After being told that she has nothing else to live for and being left by her own son, Iris is desperate and wants to kill herself. Therefore, she goes to Sally's room and asks her to kill her using heroin. However, the drugs don't kill her and Sally suffocates her with a plastic bag.

To live at the hotel unbothered by James March and the demon, Sally has to bring him one victim per year at his annual Devil's Night soirée where he gathers America's greatest killers to celebrate their crimes. Therefore, she stands in front of the hotel and talks to a man that mistakes her for a hooker. After being asked what she offers, Sally takes him to Room 78 where the soirée is located. John Lowe who is invited is drugged by the killers and he wakes up unconscious. He finds Sally who comforts him and takes him to his room. One night, John finds himself in his room with Sally in his bed. Sally then explains that she was drunk at the bar and begged her to go to his room with him where they had sex.

Sally is deeply involved with the Ten Commandments Killer and is responsible for helping commit some of the murders. Sally is in love with John Lowe, and they have had a mostly sexual relationship for the past five years, most of which, John cannot recall, as Sally is a ghost, presumably dead in the outside world. Sally has deeper feelings for John and believes he is the love of her life, but John feels differently. Her goal is for John to die in the Hotel, so he could stay with her for eternity, however Mr. March's resentment and The Addiction Demon, are both consequences she could suffer, if she commits John's murder herself, therefore she must order someone else to kill him, so she gets what she wants without the suffering the consequences.

Sally finds Elizabeth, who she uses to lure John back to the hotel, through the means of kidnapping his family. John arrives and kills Elizabeth to complete the Ten Commandment killings. Sally attempts to kill John afterward but is intercepted by March. John leaves the hotel once again, and Sally is left alone to continue murdering and terrorizing the guests. To help her, Iris grants Sally the means of the internet, where Sally becomes a blogger/songwriter and never has to feel alone again. Sally is last seen with Liz and her "family" when she wants them to kill her but Elizabeth comes and does it instead. 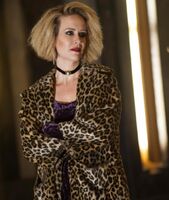