Start a Wiki
watch 01:04
Who is Sarah Paulson?
Do you like this video?

She also played junkie ghost Sally McKenna in the fifth season, Hotel, and reprised her role as psychic medium Billie Dean Howard. In Roanoke, she plays Audrey Tindall, an actress portraying as Shelby Miller in the horrific documentary "My Roanoke Nightmare".

She was the leading character, Ally Mayfair-Richards, a woman facing her phobias, in Cult. In Apocalypse, she's Wilhemina Venable, a hostile woman remolding the dying world with horrors. She also primarily reprised her role as Cordelia Goode, the headmistress of Miss Robichaux's Academy and the current Supreme.

Aside from Murder House, Roanoke and Apocalypse, she has been nominated for Primetime Emmy Awards for every season of American Horror Story she has appeared in.

Paulson was born in Tampa, Florida, the daughter of Catharine Gordon (née Dolcater) and Douglas Lyle Paulson II. She lived in South Tampa until she was 5 when her parents divorced. She spent time in Maine before moving to New York City at the age of five with her mother. She lived in Queens and Gramercy Park, before settling in Park Slope, Brooklyn. She spent her summers in Florida to visit her father. Paulson attended Manhattan's High School of Performing Arts and the American Academy of Dramatic Arts.

She dated actress Cherry Jones, the couple declaring their love for each other in 2007, during an interview with Velvetpark at Women's Event 10 for the LGBT Center of NYC. They broke up in 2009. In an interview with Broadway.com in 2013 during the revival of Talley's Folly, Paulson stated that she only dated men before her relationship with Jones, and that she has not been in a relationship since her breakup with Jones, but that she is open to relationships with women and men going forward.

Sarah's first recurring television role was on the creepy 90s series American Gothic as Merlyn Temple, a ghost who served as a guide to her little brother Caleb. She would later co-star as Elisa Cronkite in the short-lived romantic comedy series Jack & Jill. In 2002 she played the titular character in Leap of Faith. She played the Pinkerton agent posing as a tutor on the original HBO series Deadwood and Harriet Hayes in the Aaron Sorkin comedy series Studio 60 on the Sunset Strip. She also starred in the 2009 reboot of the 1998 Jeremy Piven series Cupid opposite Bobby Cannavale. Paulson is known for working closely with Ryan Murphy. Before American Horror Story, in Nip/Tuck and Pretty/Handsome. She later starred in the sister series American Crime Story in 2016 and in the 10-part miniseries, Feud in 2017.

In 2018, she starred in the American heist-comedy movie created by Gary Ross, Ocean's 8. 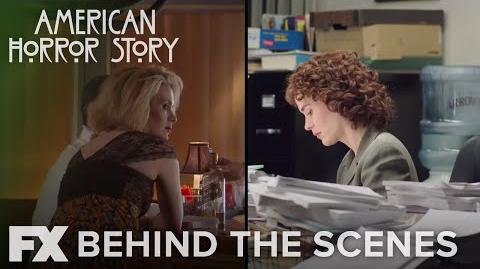 Retrieved from "https://americanhorrorstory.fandom.com/wiki/Sarah_Paulson?oldid=147981"
Community content is available under CC-BY-SA unless otherwise noted.