View source
watch 02:24
Wiki Targeted (Entertainment)
Do you like this video?
Play Sound

Satan (also known as The Devil or Lucifer) is a powerful entity wreaking havoc across the world for the sake of entertainment, with hopes to ascend and destroy the Catholic Church. He is a character in American Horror Story.

Satan is a fallen archangel who used to be God's favorite, until he fell from grace and became the first demon, also known as "The Source of Darkness".

While on Earth, Satan lacked a physical form and only existed in a host. While in control of Jed Potter, his behavior was monstrous and uninhibited, feasting on the blood of animals and chanting dark, unintelligible incantations in dead languages. After Jed was exorcised at Briarcliff Manor, he took control over the body of Sister Mary Eunice, using her innocent guise as a cover to carry out subtle manipulations and mentally torture Briarcliff's inhabitants. He took special satisfaction in mocking Sister Jude, whose dark past involved a drunken hit-and-run resulting in the "murder" of a little girl, as well as Dr. Arthur Arden, whose previous life as a Nazi scientist allowed the Devil to blackmail him into carrying out his commands.

As time went on, Satan eventually chose to reveal himself to Jude, who he had previously encountered during Jed's exorcism, and Dr. Arden, who desperately followed Satan in hopes of seeing at least a glimmer of Mary Eunice, whose innocence he cherished. After Jude was removed as head of Briarcliff and incarcerated within, Satan grew closer to Monsignor Timothy Howard, promising to help elevate him through the ranks and make him Pope. His master plan was thus set in motion: a take over of the Catholic Church.

His true form is a humanoid being with large, bat-like wings and a head reminiscent of a goat, from which two long, twisting horns protrude. Due to his status as a former angel, it is possible that he has no actual gender, though he is indicated to be male.

Largely cold, emotionless, and sly in disposition, Satan rarely smiled or laughed save for taunting others and mocking the fates of those harmed by his influence. He had very little regard for human life, and had no qualms in murdering and manipulating various mortals. He found great satisfaction in humankind's many flaws, and frequently reminded his victims of this in various violent and psychologically harmful ways. He could be perverse and sexually aggressive at times, having made advances on both Arden and the Monsignor, as well as expressing a flirtatious behavior toward Sister Jude. He seemed very comfortable in Sister Mary Eunice's skin, even in private, and used his hold over her body to take away her virginity without her consent, dominating what little bit of her soul still remained in her.

Though cruel and ambitious in nature, Satan was not without his redeeming qualities. He had strong values toward freedom of will and thought, believing firmly that no one should be told who they are or what they should be based on the rules of man and religion, and should, therefore, be able to make their own destinies. Unlike the behavior he exhibited toward adults, he appeared to be very docile around children, calmly and honestly exposing his true identity to Jenny Reynolds and smiling down at her in a friendly gesture. Despite this, the kind of behavior he encouraged in Jenny, as well as other individuals, such as Leigh Emerson, was violent and disturbing, and would thereby contribute to his overall plan of bringing destruction in the faith of God and the downfall of mankind.

In addition to his mind-breaking influence, Satan was endowed with many unnatural, otherworldly powers. Among them, the ability to possess various hosts until the moment of their deaths - only moving on to a new victim when the previous host's body was destroyed - as well as telekinetically moving objects with his mind and reading the minds of all those around him, where he took great joy in seeing other's darkest secrets and manipulating them for his own gain and amusement. Unfortunately, because the Devil thrived solely through possession, he could not escape the kiss of Shachath, the Angel of Death, as failure to escape his previous host's body in time would result in him being cast back into Hell, making the host both his strength and ultimate weakness.

Though long since banished by the Angel of Death to his eternal prison, Satan would continue to influence people for decades to come, accumulating his unseen presence in locations of massive tragedy across the world, manipulating the worst traits of their inhabitants to commit unspeakable acts of violence. Eventually, the Devil saw the perfect formula in Tate Langdon's abusive childhood to possess him into siring the Anti-Christ, Michael Langdon, whose presence would, at last, bring about the Apocalypse.

After initially getting into Briarcliff through Jed, Satan took over young, innocent Sister Mary Eunice, and slowly used malice and manipulation to get Jude fired from Briarcliff.[2] Acting as Eunice, he replaced Jude as head of the establishment, becoming superior over Dr. Arden. "Mary Eunice" slowly began to get Monsignor Timothy's approval of "her" changes to Briarcliff's conduct and daily life for the inmates. This included a Christmas party, and a showing of "Rudolph the Red-Nosed Reindeer", things Jude had previously described as being acts of turning "away from God". Still, despite the public face as sweet, innovative Mary Eunice, Satan was committing dark, far less subtle crimes in the shadows, such as killing the Briarcliff security guard Frank, setting serial killer Leigh Emerson loose on Jude, and killing a man Jude was using to get information on Arden (the Devil used this murder to reveal himself to Jude).[3]

At one point, Satan confronted Shachath, the Angel of Death, demanding she leaves Briarcliff after the Angel was "called" by a dying inmate. Shachath reported that she had been invited, unlike Satan, whom she referred to as a cousin - "like Shachath, but fallen". The Angel also noted that she could hear Mary Eunice trying to fight against the Devil, and momentarily, Mary Eunice took control of her own body again, sobbing and pleading to Shachath to free her. The Devil quickly resumed control; before leaving, Shachath warned him they would meet again.[4]

Later, Satan confronted Timothy and repeated his promise to manipulate events until Timothy was made Pope so that the Church would finally be under Satanic control. Defying this, Msr. Howard attempted to appeal to any vestiges of Mary Eunice's true self and her inner virtue. This infuriated Satan, who attacked the Monsignor and promised to devour the "last morsel of Mary Eunice's soul". Briefly, Mary Eunice regained control of her body once more, tearfully telling the Monsignor she was tired of fighting against Satan, and that she wanted to "let go".

Taking pity upon the tearful nun and seizing advantage of her weakened state, the Monsignor quickly cast Mary Eunice over a nearby staircase railing. They exchanged one last gaze as the young nun fell before she hit the floor far below. Shachath then appeared, kneeling down before the fatally injured Eunice, who again asked the Angel to take her. "I'll take both of you", Shachath replied and kissed her, releasing Mary Eunice to Heaven and presumably casting Satan back into Hell.[6]

In 1989, Satan is summoned by Ramirez and he possesses a guard in the bathroom. The possessed guard releases Ramirez from his cell.[7]

According to Billie Dean Howard, Satan was able to exert his influence through the negative energy that he amassed within the Murder House. This allowed Satan to use the ghostly occupants of the Murder House as his conduits, as it was foretold that the unholy union of a ghost and a human would bring forth the Anti-Christ.[8] This event came to pass in 2011, when Tate Langdon raped Vivien Harmon in an attempt to provide a child for the grieving Nora Montgomery.[9] In doing so, he unknowingly allowed Satan to sire the Anti-Christ, who was born in 2012 and named Michael.[10]

As the Source of Darkness and God's former favorite angel, Satan possesses vast supernatural abilities and is one of the most powerful beings in the universe. He was able to bestow Michael Langdon the powers of the Seven Wonders, as well as additional abilities, such as control over the afterlife in Hell.

Evidence of the Character's Identity

A hotly debated topic is whether the entity that took over Mary Eunice was, in fact, Satan himself, or a lesser demon. However, in the show, the character was frequently referred to as "the Devil" (and even "Satan" on a couple occasions), including when he talked about himself. Show creator Ryan Murphy has stated, when describing the character, "This is a much more sly devil, a more sly Satan. I like the idea of the devil as ambitious."[14]. Furthermore, Murphy has stated, regarding Eunice/Satan's end, "We didn't want she dies and the devil goes into someone else. I liked the idea that the only thing more powerful than the devil is the Angel of Death, which is actually the cousin of the devil."[15]

Satan in the form of Sister Mary Eunice terrorizing Briarcliff. 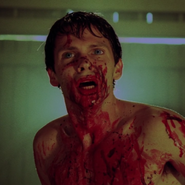 Satan in the form of Jed Potter 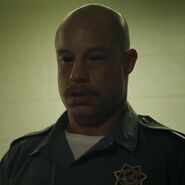 Satan in the form of an unnamed prison guard