Serena Belinda is an ambitious journalist. She is a character in Cult portrayed by Emma Roberts.

Serena was a network newscaster, she hates puppies her dream was to be on The Today Show and she was okay with the idea of sleeping with any man to get there. She didn’t get along with her colleague Beverly Hope, in fact, she used to think that people didn’t want news (like Beverly thinks) but they wanted to be distracted from the news.

Serena has hazel eyes and long dark brown hair. She is slender and beautiful.

Serena was beautiful but vindictive and petty. She was very seductive, using her beauty to attract men in order to get to the top. Serena’s personality seemed to be the same as that of an ordinary reporter, and unlike the “gentle-natured” persona, she was spiteful and bitter, which is a common stereotype of off-camera reporters.

On November 8, 2016, Serena is seen going to vote for America’s next president. She meets Beverly Hope there and they have a verbal fight. She states that she is voting for Hillary Clinton, but ends up casting her vote for Donald Trump.

Serena is later seen doing one of her "fluff" pieces, a report about the "Latest Relaxation Trend (Part 2 of 6)". Kai Anderson later becomes fascinated with Beverly and looks her up on YouTube. He comes across a video of Serena who is seen reporting and having “high hopes” for Beverly, after her rampage. This is when Kai decides that Serena will be the sacrifice for Beverly's allegiance.

She later flirts with her boss Bob, who offers her to spend a weekend with him at his cabin. Before they can make sexual advances at each other, Beverly interrupts them. Bob speaks rudely to Beverly and leaves. Serena then threatens Beverly. She states that she is striving to be on The Today Show one day, and will sleep with whoever she has to in order to get there.

The next day, Serena and her cameraman Cole film a pre-recorded segment for an annual Puppy Adoption event. She berates the cameraman and complains about having to hold a puppy. As she films her segment with the puppy, some Clowns approach her and she turns around. Serena thinks that the Clowns are part of the event so she jokingly asks the female Clown a question. In response, the female Clown whips out a butcher knife and stabs her in the gut. As the knife slowly drags upward, it briefly guts her. Serena screams in pain. Then, the male Clown stabs her in the side of the neck, she collapses to the ground with the puppy while the other male Clown stabs Cole, who tried to help the reporter. All the Clowns start to continuously stab them viciously to their deaths. In the background, the male Clown that killed Serena is seen holding her heart.

It is later revealed that Kai, Harrison, and Meadow are the Clowns who butchered Serena and Cole so that Beverly would join their cult.

In Holes, it is revealed that Serena’s parents are suing Channel 7 News because they felt that she wasn’t protected enough. Beverly asks Bob if they are going to release the tape of her murder, but he denies it. Because her murder tape isn’t going to be released, the cult decides to film Bob’s murder and release that instead. 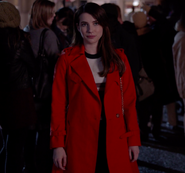