Shachath (also known as the Angel of Death) is a benevolent entity that appears to give her kiss of death to individuals who are dying or wish for death. She is a character in Asylum portrayed by Frances Conroy.

Shachath only appears when she is called and whoever calls receives her "kiss of death", serving much like a grim reaper. Sister Mary Eunice is agitated when she encounters the dark angel bestowing her kiss upon the Briarcliff inmate known as Miles. She has appeared before Grace, Lana Winters, Sister Jude, and Timothy Howard.

She appears to be a woman in complete mourning, but at the same time trying to suppress the emotion.

Commenting on the character, Conroy described a simplicity to the character as a servant in nature - constantly fulfilling her duty in every way, including comforting others in their time of need and difficulty usually moments before their death. Conroy also described the character as "benign". Shachath also claims that she "never judges" those who call on her.

She manifests in a classic black 1940's attire. She wears a fishnet veil which covers her eyes, and when she performs the kiss of death, two large black feathered wings spring from her back. Commenting on the character's distinct style, Ryan Murphy described it as a mixture of "Catherine Deneuve in The Hunger, meets a Japanese designer, meets Mildred Pierce".

She appears to several main characters, such as Lana Winters, Sister Jude, and Grace. She gives Grace the kiss of death after she is shot by Frank in an attempt to protect Kit Walker.[4]

Shachath appears to Timothy Howard in the sanctuary as he is nailed to the cross. Timothy pleads for her to help him, and she replies "I'm here."[5]

Shachath does not end Timothy's suffering but believes he must cast away the Devil that possesses Sister Mary Eunice. She later appears when Mary Eunice dies, saying she's taking both her and the Devil and casts the Devil back to hell.[6]

When Briarcliff is put under the control of the state of Massachusetts and turned into a refuge for surplus inmates, Judy Martin is confronted by a domineering, unnamed new arrival who seems to bear the physical appearance of Shachath, though her voice is raspier due to cigarettes. When she attempts to usurp Judy's role of authority amongst Briarcliff's populace and sexually harasses her, Judy attacks "Shachath", only to find that the Angel was part of an elaborate hallucination she has been suffering from over the past two and a half years.[7] Shachath appears to Jude, who is willing to accept the "kiss of death" this time around.[8]

Shachath is an immensely powerful spiritual entity with a variety of supernatural powers. 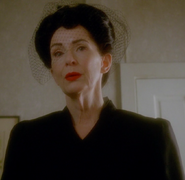