Diana Cross
Shannon Lucio (born June 25, 1980) is an American actress who made her first appearance in the sixth season of American Horror Story, subtitled Roanoke, in the role of Diana Cross.

Shannon Lucio received her BA in theater from the University of Southern California. Shortly thereafter, she landed her breakout role on Fox's "The O.C." Most recently, she reprised her character Caroline Compton on the last season of "True Blood." Past notable credits include "Fireflies in the Garden," with Julia Roberts and Ryan Reynolds, "Feast of Love," directed by Robert Benton, and recurring arcs on "Prison Break" and "Grey's Anatomy." A founding member and Creative Executive of Filament Features, Shannon is involved in all aspects of production, simultaneously acting in and producing many of Filament's projects. Shannon has also ventured into screenwriting with "The Eternity of Energy.[1] 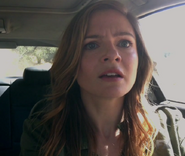