Imitation is the best form of tragedy. Coming clean can be pretty messy.[1]

Richard Ramirez corners Brooke, Chet, Rita, and Ray after he breaks into the nurse's cabin. Ray abandons the group, only to be attacked by Ramirez, who proceeds to stab him. While Brooke and Rita escape the cabin after gaining the car keys, Chet decides to save Ray by throwing Ramirez off of him and they run away. Montana, Xavier, and Trevor are attacked by a group of unseen assailants, revealed to be local townie pranksters, Larry and Keith, dressed as Richter. The real Richter proceeds to murder the pranksters, while the counselors escape. Richter spares one of the pranksters, Pete, when he is able to sympathize with him. Chet and Ray fall down a pit someone has put spikes in, and Chet is impaled, Chet recognising it as a tactic used in Vietnam and assums Richter responsible. Brooke and Rita manage to escape to the parking lot; however, Rita refuses to get help and suggests that Brooke should take her car. As Brooke is about to open the car door, Rita injects Brooke with a tranquilizer and it's revealed that Rita is a fraud. She is really a psychology PH.D student, named Donna Chambers, who is obsessed with studying serial killers, such as Richter.

In a flashback that takes place a week before the current events, Chambers was able to persuade Dr. Hopple to let her study Richter, and it's revealed that she had assisted him in his escape from Red Meadows Asylum. Chambers then abducted the real Rita, stealing her identity in order to observe Richter's potential murder spree at the camp.

A guilty Ray confesses to playing a role in the death of a fraternity pledge when he believes Chet is dead, having joined the others at Camp Redwood to escape conviction. Chet is revealed to have survived the fall, having heard Ray's confession but Ray leaves him to die.

Montana, Xavier, and Trevor take refuge in a nearby shed, only to discover the real Rita tied up and gagged. They free her and she attempts to escape, but is promptly murdered by Richter. Ray runs into Montana, Xavier, and Trevor and Trevor gives Ray the keys to his motorcycle, sending him and Montana to call for help at a nearby phone booth. Xavier and Trevor discover Chet in the pit and pull him out, before accidentally killing Wide Load, assuming that he was Richter.

Ramirez appears and ambushes Ray and Montana, and Ray subsequently abandons Montana but is decapitated by Richter in his attempt to escape. Montana momentarily struggles with Ramirez, only for the pair to share a kiss. Montana then asks, "Why haven't you killed her yet?", implying she has been working with Ramirez from the beginning.

Pete is a guest starring character in American Horror Story portrayed by Sean Liang. Pete, along with his friends, Larry and Keith, do stupid stuff on Jingles Day to represent Mr. Jingles. Pete is taking a piss when Mr. Jingles goes to kill him but Pete thinks he is Larry. Pete leaves and goes to have fun and Jingles let's him live because Jingles sees something in him that is a parallel to himself. Xavier and Trevor mistake Pete for the real Jingles and they kill him on accident and Pete becomes a ghost. When Benjamin returns Larry and Keith capture him and Pete reminds him that Montana said not to kill anyone until the festival and they let Benjamin go. When Benjamin comes back the ghosts capture him. Benjamin says that his mom is the "Lady in White", much to the ghosts' suprise. When Bobby comes to Redwood, Montana explains that the ghosts have been killing Rameriez to keep Bobby safe. She also explains that the ghosts killed Margaret. Pete is last seen killing Margaret one last time.

Keith is a guest starring character in American Horror Story portrayed by Renton Pexa. Keith, along with his friends, Larry and Pete, are representing Mr. Jingles by doing stupid things on Mr. Jingles Day. Keith is then killed by Mr. Jingles and Keith then becomes a ghost. His body is seen by Margaret and she either picks up his or Larry's mask and she draws a bloody cross on either his or Larry's mask. When Keith sees Benjamin he begins to almost kill him but Pete reminds them that Montana said not to kill anyone until the festival and Keith let's him go. Benjamin comes and the ghosts capture him and Benjamin says that his mother is the "Lady in White", much to the ghosts' suprise. Later on, Keith, Larry, and Xavier tie Benjamin up and throw him into the ocean on a boat. When Bobby came to Redwood, Montana told him that the ghosts have been killing Rameriez to protect Bobby. Montana then explains that the ghosts killed Margaret. Keith is last seen killing Margaret for a second time.

Larry is a guest starring character in American Horror Story portrayed by Andrew Tippie. Larry was a prankster who, with his friends, Keith and Pete, do stupid stuff to represent Mr. Jingles. He gets killed by Mr. Jingles by being stabbed in the neck making him a ghost. His body is seen by Margaret and she takes either his or Keith's mask and with his or Keith's blood writes a bloody cross on the mask. When Larry sees Benjamin he almost kills him but Pete reminds him that Montana said not to kill anyone until the festival and Larry let's Benjamin go. Benjamin comes back and is captured by the ghosts and Benjamin says that his mother is the "Lady in White", much to the ghost's suprise. Later on, Larry, Keith, and Xavier tie Benjamin to a boat and send him off in the middle of the ocean. When Bobby comes back, Montana explains the ghosts have been killing Rameriez to keep him safe. Montana then explains that the ghosts killed Margaret. Larry is last seen killing Margaret for a second time.

Chan is a guest starring character in American Horror Story portrayed by Mark Daugherty. Chan was a pledge during hell week and he was extremely sick and accidentally fell down the stairway of the frat house. Ray begins to dispose of the body by throwing Chan's car of a cliff but Chan is still alive but Ray let's go of his hand accidentally and Chan accidentally grabs Ray's watch and Chan dies. Ray regrets doing this since Ray's watch fell in the car and the car was found by bystanders meaning Ray will most likely be arrested.

Rita is a guest starring character in American Horror Story portrayed by Dreama Walker. Rita was driving and going to work as the nurse of Camp Redwood one day but Donna kidnapped her and took her identity as the new "Nurse Rita". Xavier, Montana, and, Trevor stumble over Rita in an empty cabin. She panicked and the three was not able to stop her and calm her but it was too late. Benjamin caught her and dropped his knife, replacing it with an oar. She screams and Benjamin impales her through the mouth with an oar, killing her instantly. 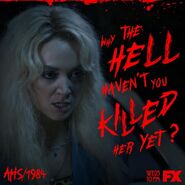