Bradley Buecker
"Sojourn" is the eighth episode of Apocalypse. It premiered on October 31, 2018.[1]

After the death of his most trusted advisors, Michael goes on a vision quest to find his place in the world. A group of followers devoted to his unholy father point him toward his destiny.[3]

Michael arrives at the reservoir following the execution of Ariel, Baldwin, and Mead. He learns the identities of the bodies via the Sight, touching their charred remains. Michael is then confronted by Cordelia, and he decides to go to Hell to find Mead, but Cordelia says her soul is hidden by a spell and Michael can't see her any more. Michael shouts painfully, and Cordelia trys to puts the subject of redemption in the picture but is dismissed by him, who threatens to kill every last witch.

In the surrounding woods, a lost Michael embarks on a journey to contact his father. Four days later, he is confronted by his conscience, due to dehydration, and is presented with images of heavenly figures (children bearing food and beverages, Anton LaVey, Mead, and an Angel). A goat appears in which Michael questions if he's his father or not, and then presumes to kill it.

Michael arrives in the city where he ventures an alleyway, and finds a Satanic emblem. He comes across a bouncer who notes Michael's fatigued and weakened state and lets him into the below ground chambers. There, a High Priestess of a Satanic congregation berates her fellow worshippers, believing that enough sin will encourage the arrival of the Anti-Christ. Michael sits at a pew in the back where he meets a woman named Madelyn. She decides to take him home with her to help him nourish.

At Madelyn's home, Michael, while feasting, listens to Madelyn's warped view on Satanism, who tells him that she has everything she wants and more all because she sold her soul to Satan. Michael mocks her for her views and she attacks him until he presents the mark of the beast on the back of his neck. She believes him to be the Antichrist and praises him.

Back at the congregation, the High Priestess makes a grand entrance with the bellowing choir behind her. Afterward, she presents two people for sacrifice and allows a new member to do the honors. Madelyn interrupts and advocates Michael for the hecatomb, to which the High Priestess enquires Michael's true nature. He confirms his identity and the congregation praise him. He then presumes to kill the two people offered up for sacrifice without any mercy.

The congregation hosts a dinner for Michael, and Michael is visibly displeased with their astoundment. Madelyn offers her services to him and he tells her there's only one thing he wants: Mead's resurrection. Madelyn discloses an opportunity.

Madelyn and Michael drive to a privately owned organization where Michael asks how he could repay her. Madelyn asks him to put in a good word to Satan for her. She then leaves Michael.

In the HQ, two scientists (Jeff and Mutt) work on a sex-bot automaton product line and snort coke. Running out of their coke, Mutt pages the front desk where Miss Venable notifies them of the arrival of their next stash. A young PA arrives and Venable berates her cruelly. In their laboratory, Jeff and Mutt work on the radio that would be later established in Outpost 3. Venable brings them their coke and a prostitute climbs out from beneath Mutt's side of the desk. Venable then notifies them of Michael's arrival. As she leaves, Venable jealously scolds the two scientists, telling them not to call her "babe" ever again.

Michael arrives at a compartment in the HQ where he's greeted by Jeff, Mutt, and the prostitute. Jeff and Mutt make satire of Michael's appearance and Michael showcases his true nature, frightening the prostitute. As she attempts to escape, Michael burns her alive, consigning her soul to hell, and the scientists bow down to praise him.

At an outdoor oriental restaurant, Jeff, Mutt, and Michael eat sushi. The scientists enquire about the natures of hell and propound their capabilities in serving Michael. Michael presents them with one task: to retrieve his beloved mother figure.

Jeff and Mutt confer in their laboratory and decide they have something they need to owe to Michael. They begin their construction on Mead's automaton and present the final product to Michael. They warn him of the probabilities of robot Mead's imperilment, given he doesn't treat her cautiously. They awake her and she immediately recognizes Michael, telling him how she's missed him.

Madelyn is a charitable woman who dedicated her life to Satanism. She is a character in Apocalypse portrayed by Harriet Sansom Harris.

Madelyn meets Michael Langdon during a Satanic congregation. She decides to take him home to help him with his nourishment. At Madelyn's home, she tells Michael about her warped views in Satanism, and tells him that she has everything she wants and more all because she sold her soul to Satan. Michael mocks Madelyn's beliefs that Satan will rise, and he reveals himself to be the Antichrist. Madelyn angrily accuses him of blasphemy and holds a knife to his throat, until she notices the 666 birthmark behind Michael's ear. Realizing he is indeed the Antichrist, Madelyn drops the knife, and bows down before Michael, pledging her allegiance.

At the congregation, she interrupts and presents Michael to the High Priestess, where she enquires on his true nature, therefore causing the congregation to praise him. The congregation hosts a dinner for Michael, where Madelyn offers her services to him. Michael tells her that what he needs is Mead to be resurrected. Madelyn discloses an opportunity.

Madelyn and Michael drive to Kineros Robotics, a privately owned organization, and Michael asks how he could repay her. Madelyn asks him to put in a good word to Satan for her, saying she wants to be in the "lowest circle of hell". She then leaves Michael.

Hannah is a character in Apocalypse portrayed by Sandra Bernhard. Hannah is the High Priestess of the Church of Satan. She was first seen preaching about evil at the church. She is later seen introducing Phil and letting him sacrifice two people until Michael shows up saying he is the son of Satan. He then kills both people chosen to be sacrificed. She is last seen giving Michael some food since he is basically starving. She is presumed dead by the nuclear holocaust but is brought back by Mallory using Tempus Infinituum.

Phil is a character in Apocalypse portrayed by Dominic Burgess. Phil is first seen about to sacrifice two people as he is a new member of the Satanist community. When Michael comes in, though, Michael takes both people's lives as sacrifice as his right as the son of Satan. Phil is presumed dead from the nuclear holocaust but is brought back by Mallory using Tempus Infinituum. 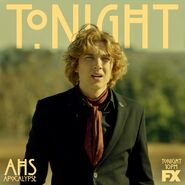 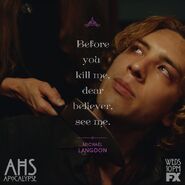 "Michael has returned to his devoted followers." 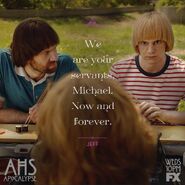 "You can't destroy the world alone..." 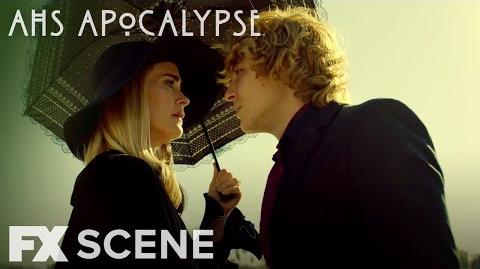