One of history's most famous murder victims pays the house a visit. Constance discovers more of Tate's bad behavior.[1]

A woman emerges from a taxi for her appointment with a new dentist whose practice is located in the former Montgomery mansion. She doesn't have a lot of money, and asks if she can pay for her appointment a different way. Later, a mother is strolling with her child when she sees a mutilated body. She initially thinks that it is a mannequin, but a second glance shows that it is the body of the woman from earlier, now known forever as "The Black Dahlia".

Moira is making the bed in the master bedroom. Ben enters and tells her that Violet is holed-up in her room, then asks if Moira would make Violet a sandwich. Moira begins to make advances on Ben and claims that it's a "shame what's happened to Vivien", and says that the two had become friends. After more advances, Ben finally rejects her but Moira tells him that it is just a matter of time before he succumbs to her.

Travis arrives at Constance's home and finds her drunk and upset about the death of Addy. They fight over Travis' freeloading and on the way out, Travis encounters Hayden who lures him into the house and has sex with him.

Jack Colquitt arrives with Marla, Hayden's sister, who has not seen or heard from Hayden in so long that she has reported her as a missing person. After many accusations from Marla that Ben had done something horrible to Hayden, Hayden suddenly appears in the room and claims that she hasn't contacted her sister because she feels that her sister has no other care for her other than to borrow money. She claims to be moving in with Ben, and so her sister drops the case and leaves. Privately, Hayden tells Ben that she finally had an abortion.

Elizabeth Short ("The Black Dahlia") arrives for an unscheduled session with Ben. He insists that she needs to make an appointment, but agrees to see her the next day. She offers to "pay" him in sex, and he says no, but fantasizes about her offer.

Dr. Hall calls Ben, saying she has some unsettling news that she normally wouldn't tell a father. Vivien's twins were conceived by a rare medical phenomenon in which each twin is of differing paternity, meaning that the Rubber Man and Ben are both fathers. Ben is blind-sided.

Moira is cleaning when Constance arrives, accusing Violet of having sex with Travis. Moira claims that it is an absurd accusation since Violet is in love with Tate, adding that Travis wouldn't so much as "get a look" from Violet. Moira relays the news about the twins having separate fathers and insinuates that Tate is one of them. Constance confronts Tate, and he reluctantly admits to raping Vivien. Constance starts to beat him in a fit of rage, and he begs her not to tell Violet.

Ben walks in on Moira and Elizabeth having sex on the couch in his office. Ben fantasizes about joining them. He demands that Elizabeth put her clothes on and leave and informs her that he can no longer treat her. He then promptly fires Moira.

Moira leaves and Hayden enters. Elizabeth explains to Hayden that she wants nothing more than to become famous, even saying that she "needs" it. Hayden asks her if she realizes who she is, and then explains her history.

Dr. David Curran (the dentist) rapes Elizabeth while she is under anesthesia, and she dies from an overdose of the gas. Frantic, he drags her to the basement where Charles arrives, stating that he can be of some help to Curran. Charles then begins to dismember Elizabeth, saying that she will be much easier to transport that way. Curran looks on as Charles gives her a historic "Chelsea Smile". When Curran asks why he is cutting her in such a manner, Charles claims it is to give her a permanent smile since "she seemed so sad".

Ben visits the institution where Vivien is being treated. A doctor explains to Ben that Vivien is being restrained after attacking an orderly. Upon entering Vivien's room, Ben explains that he knows that she can't respond to him, but vocalizes his disgust of her supposed betrayal. After he leaves, Vivien seems stunned and very aware of what Ben was saying.

Ben sits in a bar in Boston with Hayden. She admits that she has lied to get closer to Ben, and he admits that his marriage is not doing well.

In the gazebo, Ben and Hayden discuss their affair. Hayden insists they are destined to be together, but he calls his actions unforgivable. He says he was never in love with her and wants nothing more than for Vivien to return home. They kiss and Hayden tells Ben that Vivien has been having an affair with Luke.

Constance apologizes to Travis for her actions and then asks him to marry her. She explains that she wants to raise a baby as her own, and wants him to be the father. Surprised, he claims he is unready for marriage and children and explains that he's still trying to build his acting career, but Constance shoots him down, citing her own dreams and experience. Their argument turns physical and Travis leaves to return to Hayden and the two have sex again, but he complains about Constance the whole time. After they finish, he leaves abruptly, saying that he loves Constance and wants to make things work. Insulted, Hayden stabs him multiple times.

Travis' ghost appears, as do Elizabeth's and Charles'. Travis' ghost mournfully surmises that Constance was right that he would never be famous. Hayden, in turn, comments that the only "famous" person around here would be Ben, being accountable for Travis' murder when his body is found in his house. Belatedly, she realizes that Ben will go to jail if held accountable, causing him to leave the house. Charles remarks that the body needn't be found in the house and that he can make the body more "portable" if Hayden can find somebody to move the body out of the house. She recalls someone who owes her a favor and Travis' severed body is discovered by some guys playing basketball. Larry, who is the one Hayden has called upon, watches from a distance.

Constance visits a more lucid Vivien and asks how the baby is doing, offering to help Vivien as much as possible. Vivien tells Constance she was raped and isn't crazy. Constance claims that she has believed Vivien all along, though Vivien asks that she not say anything, as she wants the doctors to think she is "coming to her senses".

Ben triggers the alarm to attract Luke to the house and confronts Luke about having an affair with Vivien, telling him about the twins. Luke says that he is sterile, assuring Ben he isn't the father. Moira sees Ben holding the Rubber Man mask, which was hidden and teases him, trying to tempt him into cheating. Ben refuses her again and makes it clear he loves Vivien. Moira is finally convinced and congratulates Ben. As she leaves, Ben sees a much older Moira.

Billie Dean tells Constance about the pilot for her television show, which may be picked up by Lifetime. Constance asks her about ghost conceptions and Billie Dean tells her about the "Pope's Box". In the "room of tears", each new Pope opens a box containing a secret about the end of the world. Billie claims, "A child born of human and spirit will usher in the end of times, it is the essence of evil, a perversion of the immaculate conception." Constance is in shock, believing this child to be Vivien and Tate's.

Dr. David Curran is a former owner of the Murder House and a dentist who Elizabeth Short makes an appointment with. Her friend Nabby Pierce had recommended Dr. Curran. Short announces she is short on cash, but will do whatever she has to for dental work. Curran then puts Short under a high dosage of anesthesia and proceeds to rape her before he gets to work on her teeth. However, Curran unknowingly gave Short too much anesthesia which kills her. Panicking, he drags her down to the basement, where Charles Montgomery assures him he can help. Charles, however, dismembers the body for portability, empties her innards and cuts her on the side of her face to make a Glasgow smile. Curran disposes of the body in a park, where it is found by a mother and her young child.

Marla McClaine is Hayden's sister who claims to be concerned for her safety and involves the police in confronting Ben.

Betty Bersinger,[2] credited as "Young Mother", is the woman who discovered the body of Elizabeth Short. While on a stroll with her three-year-old daughter, Ava, her child points and wonders what is in the grass. At first glance, Betty believed that it was a department store mannequin, but taking a closer look, Betty is shocked to see the mutilated corpse of Elizabeth Short. 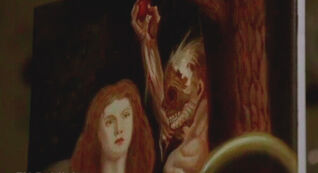 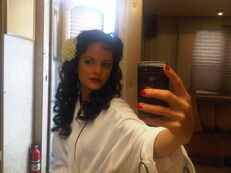 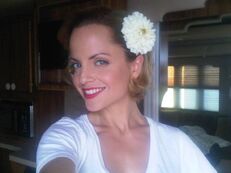 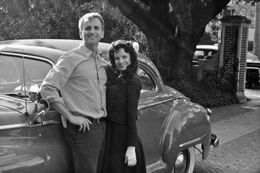 Mena Suvari (Black Dahlia) with the director of the episode, John Scott, in front of the Murder House 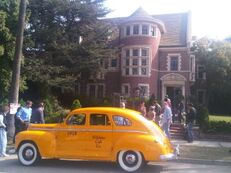 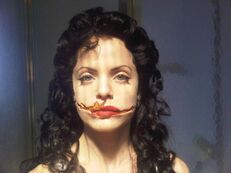 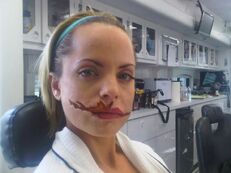 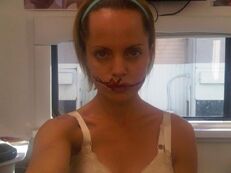 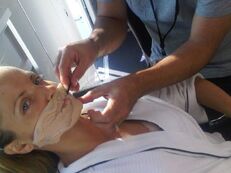 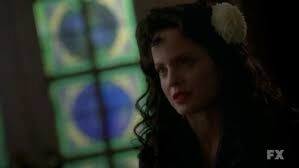 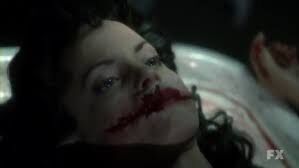 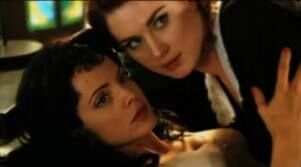