Taissa was born and raised in Whitehouse Station, New Jersey. Farmiga attended public school until the fourth grade when her mother began homeschooling her along with two of her siblings. In total, she has six siblings. Her parents are Ukrainian immigrants Mykhailo (Michal) L., a computer-systems analyst, and Lubomyra (Luba) Spas Farmiga, a schoolteacher. Taissa's father was born in 1942 and her mother in March 1949; thus they were already 52 and 45 years old respectively when they had Taissa, their youngest. The Farmigas first had four children (one of which is actress Vera Farmiga, the second oldest) and then with a 10 - year gap between child No. 4 and child No. 5, another three children.[1] Taissa does not speak fluent Ukrainian, but does understand some of the language.

Her only prior role was playing the teenage version of her older sister, Academy Award nominee Vera (who is 21 years older than Taissa), in Vera's directorial debut, Higher Ground. Her "salary" for acting in Higher Ground was a 2004 Toyota pick up truck that Vera still owned.[2] Another sister of Taissa, Laryssa, her grandmother, and her nephew (Vera's son) also star in the movie.[3] Laryssa is three years older than Taissa and was born with spina bifida.

“Emotional scenes are kind of fun for a while – it’s nice to get a good cry out – but Violet has been pretty emotional in the second half of this season. And all of that emotion gets to you.”

The downright scary scenes, meanwhile, “are fun to play,” she maintains because the set pieces so easily set the mood. “That basement is kind of freaky!” Farmiga admits that “there have been moments” where she and TV mom Connie Britton might trade looks between takes à la “This is so crazy!” But thanks in part to a smiling crew and cast, she says, “You just jump back into it” for the next scene.

Working alongside the likes of acting vets such as Britton, Dylan McDermott, and Frances Conroy, let alone two-time Oscar winner Jessica Lange, “has been great. Sometimes I wish I could just sit down and watch them, to see how they play out a scene, but then I remember, ‘Wait, I’m in this scene, too,’ and you’ve got to act.”[4]

She portrays three different roles in American Horror Story. Her first role was Violet Harmon in Murder House, and her second role was Zoe Benson in the third season, Coven. She later reprised both her roles as Violet and Zoe in the eighth season, Apocalypse. Her third role was Sophie Green in the sixth installment of the show, Roanoke.

Farmiga is the youngest of seven children, the daughter of Ukrainian immigrants Mykhailo, a computer-systems analyst, and Ljuba Farmiga, a schoolteacher. Her older sister is the Oscar-nominated actress Vera Farmiga and her brother-in-law is a musician, Renn Hawkey. She was born and raised in Whitehouse Station, New Jersey.

In May 2019, she was reported to be engaged to screenwriter and director Hadley Klein. As of 2020, Taissa and Hadley are married. 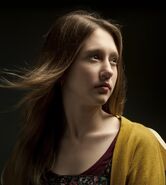