Teresa Morrison is a self-described "horror freak" and the newlywed wife of Leo. She is a character in Asylum portrayed by Jenna Dewan Tatum.

As horror fans, Teresa and her new husband Leo took a self-curated haunted honeymoon tour. They were "consummating their marriage" in multiple landmarks of murder. One of their visits was to the now abandoned Briarcliff Manor. It was their last stop whether they intended it or not.

Teresa was a beautiful woman with wavy mahogany hair, olive complexion and a slim but voluptuous body. Teresa was adventurous and passionate about horror, especially crime news and real-life crime mysteries. A passion that led her directly into the hands of an actual serial killer.

In 2012, Teresa and her husband, Leo Morrison, spend their honeymoon at present day Briarcliff Manor, which is now abandoned. The two decide to have sex at various locations in the manor, while doing so they stop when they hear a noise coming from a somewhere in the manor, leading them to a door, they try and open it, only to find that it's locked. Teresa persuades Leo to put his arm through the slot to get a photo of what's inside. Teresa then witnesses Leo getting his arm severed by something on the inside of the door. She puts a tourniquet on his arm to make sure he doesn't bleed out and then leaves to get help. While running for help, she eventually encounters Bloody Face.[1]

Teresa flees Bloody Face and attempts to rescue Leo before taking refuge behind the door wherein lies whatever ripped off Leo's arm. From within she watches as Bloody Face repeatedly stabs Leo. She screams as he begins beating on the door.[2]

As Bloody Face breaks open the cell door where Teresa has taken refuge, Leo intervenes as Bloody Face throws her against the wall, attempting to kill her. Leo stabs Bloody Face in the chest, and Teresa finishes the job, killing him. The couple make their escape, only to see two other Bloody Faces coming from front and behind. Devon, one of twin brothers that are Bloody Face copycats, shoots both of them.[3]

She awakens on the kill table of the person that claims exclusive rights to the name of Bloody Face in 2012.[4]

Teresa screams as she is being skinned by Johnny Morgan. He tells her to shut up as it is very delicate work.[5]

A flashback reveals that Johnny Morgan, the 2012 Bloody Face, was also present in the dilapidated Briarcliff when Leo and Teresa showed up on their honeymoon. They begin to have sex, but stop when Johnny flips over a table and makes a loud noise. It is also revealed that Johnny was the one responsible for severing Leo's arm, hacking at it when he sticks it through the slot on the cell door to investigate the room.[6] 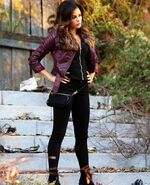 Teresa trying to save Leo while attempting to flee from Bloody Face.

Teresa besides Leo in an asylum hospital bed

Retrieved from "https://americanhorrorstory.fandom.com/wiki/Teresa_Morrison?oldid=152095"
Community content is available under CC-BY-SA unless otherwise noted.