The Chemist is is a mysterious individual behind the creation of Muse, an addictive drug. She is a character in Double Feature portrayed by Angelica Ross. 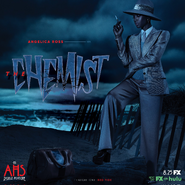 The Chemist moves to Provincetown