Bradley Buecker
"The End" is the first episode of Apocalypse. It premiered September 12, 2018.

In the wake of the nuclear apocalypse, a select group survives in a sealed bunker dubbed Outpost Three ruled by a tyrannical matriarch. As tensions rise, the occupants question whether the real hell is outside... or locked in with them.[1]

Hairdresser Mr. Gallant makes a unique cut for heiress social-influencer Coco St. Pierre Vanderbilt. Her assistant Mallory sees an alert of an incoming nuclear missile, and Coco's father calls from Hong Kong with a confirmation and an invitation to take a flight to safety with a limited number of refugees. Coco's significant other, Brock, sees the news that several cities have already been destroyed. Evie Gallant reluctantly goes with her grandson to meet the flight at the Santa Monica airport. The panicking crowds cause chaos in the streets, preventing the refugees from reaching safety until the last few moments. Brock, stuck in traffic, tries running for the airport. Coco's chauffeur shoots away refugees from Coco's plane as it takes flight above an angry Brock. Once airborne, Mallory discovers no one is flying the plane. From afar, the passengers see the mushroom cloud rise from a burning Los Angeles.

Forty minutes before the bomb, Timothy Campbell anxiously awaits news of his acceptance to UCLA. His family celebrates with him as the sirens begin going off. Suddenly sobered, the family realizes they have nowhere to go. Agents of The Cooperative swiftly arrive to take Timothy away, as his genetic submission to an ancestry website screened him as an ideal candidate for survival. They assure him and his family that his only shot at survival is to go with them. The agents take him against his will and store him in a cage in an undisclosed bunker, where he meets Emily. She says she was roused from sleep in jail (for protesting) and as the two compare notes, they feel the explosion from the missile detonation.

Two weeks later, the agents transport the two to one of ten financed outposts, dropping them at the gates of the refuge in contamination suits. A black-clad figure leads them inside. Before entering, they witness two survivors being executed outside the bunker. Once decontaminated, the pair meets Wilhemina Venable, who welcomes them to Outpost 3. The former boy's school was converted by The Cooperative of visionary minds into a refuge. Venable explains that the two are "purples", hand-selected elites chosen for survival. "Grays" are their servant counterparts, grateful for seclusion from the fallout. Venable herself is the local Cooperative representative, and she explains the house rules. Leaving the building is forbidden, due to radiation hazards. Sexual contact, or "copulation", is also forbidden; the executed pair broke that rule.

Timothy emerges from the shower and finds the numbers 666 written on his mirror, as a voice whispers "Beware, Timothy!" Dressed, he joins Emily for dinner. Mallory, the single designated "gray" on the flight, is among the other all-purple refugees at dinner, as are Stu, Andre, and Dinah Stevens, an actress. Dinner is a nutritional cube, and Coco balks. Venable warns that even those supplies are meant for a few years and conditions must improve or options will be limited.

A carrier pigeon arrives inside the perimeter bearing a message from The Cooperative. Three outposts have been overrun, and they are the only "civilized" people left. The rest are starving or dying. Miriam Mead detects a radiation spike and examines the purples. Gallant and Stu are found to be contaminated by fallout from outside and are pulled from dinner to be scrubbed. Stu is too far contaminated for salvage and is executed.

Miriam visits Venable in her room, and they pretend to be "purples". They conspire about dispensing sadistic punishments, and Mead, a former military agent, admits they've been making up rules and punishments as they go along; Mead set the Geiger counter to maximum sensitivity to frame Stu. They come back to dinner the next night with a surprise of soup instead of the typical cubes. Andre discovers bones in the stew and assumes the meat is Stu's remains, though Venable insists it is not.

Dinah reminds a protesting Andre that Venable also ate the meat, which would be poisoned if it were a contaminated Stu. Gallant realizes that the song on the radio, which has been the same for weeks, has changed. The refugees take it as a sign that they are going to be rescued.

18 months later, the same song is playing and the refugees are desperately bored. Timmy and Emily are keeping up a subtle romance, limiting themselves to a chaste kiss per day. Nuclear winter has killed off much life outside, and Venable announces a further ration of dwindling cubes. Gallant rages until the perimeter alert goes off. The gates open to a horse-drawn carriage, bearing Michael Langdon, an agent of the Collective with an unlimited clearance. Mead disposes of the horses while Michael Langdon parlays with Venable.

Langdon explains that he is there to evaluate the residents for possible transfer to the last remaining sanctuary as six have been overrun, and the remaining three beyond Outpost 3 are soon to be. He could take any, all, or none of them; those who do not meet his say-so will meet the same fate as the horses.

Stu is a character in Apocalypse portrayed by Chad James Buchanan.

Stu was one of the refugees selected as "purple" at Outpost Three along with his lover, Andre Stevens and the latter's mother, Dinah.

During one of the frugal dinners, Stu and Mr. Gallant are found to be contaminated by fallout from outside. Both of them are taken in a decontamination room by Ms. Mead to be subjected to a brutal and painful "decontamination" which involved roughly scrubbing their bare naked bodies with Tampico warehouse brooms.

Unfortunately for him, Ms. Mead's Geiger counter "still detected radiation" after the cleansing. Deemed too contaminated for salvage, he was quickly executed on the spot by Ms. Mead. After his untimely death, his flesh was cooked and served to the other refugees in a stew, much to everyone's horror, except Evie Gallant. Fortunately, this would later be reversed entirely by the witch Mallory via the use of Tempus Infinituum, allowing Andre Stevens and Stu to continue to live happily together in the new timeline. 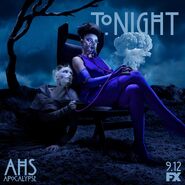 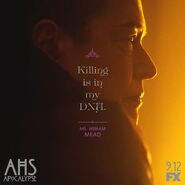 "Meet the warden of Outpost 3" 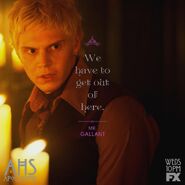 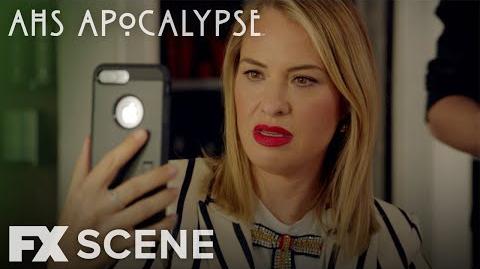