Axelle Carolyn
"The Future Perfect" is the tenth episode of Double Feature. It premiered October 20, 2021.

Mamie takes matters into her own hands. The fate of the future is revealed.[1]

Anti-war protesters hound President Richard Nixon outside the White House. Valiant Thor insists that the Vietnam War is a necessary distraction from the vast numbers of abducted and missing Americans. Nixon and Henry Kissinger are annoyed at Thor's timetable lasting an additional 50 years. While the current war will not last until 2021, the visitors have a full slate of additional diversions in mind to keep the public's attention. Unseen to Nixon, Kissinger's mask is starting to fail, and his reptoid nature was nearly revealed.

Three years prior, Dwight Eisenhower lays in a hospital bed. Mamie chides him for discussing something stressful (against doctors' orders) when he brings up the war and Nixon's election. Mamie despairs of the conversation when he tells her about the known existence of the extraterrestrial's reptilian adversaries. She is far more interested in her legacy of American celebrations of birthdays, Halloween, Thanksgiving; her new project is Evacuation Day, though Eisenhower does not believe it will catch on widely. Valiant Thor drops in for a visit. He respectfully offers to preserve Eisenhower's life at Area 51, but the former President is intent on dying. He is well aware of Thor's continued relationship with Mamie, and says they deserve each other. He dies soon after, and Mamie declares that she would take Thor up on his immortality offer.

Back in 1972, Gordon Liddy is summoned to see Nixon. Nixon, in a coded way, tells the political operative that his manipulators think he is cracking under stress. He knows that he was positioned to be the scapegoat for all the extraterrestrials have planned. The President instructs Liddy to surveil Valiant Thor's offices at the Watergate Hotel.

Meanwhile, in a deserted parking garage, Mamie approaches Bob Woodward to tell him about Nixon's plan under the pseudonym "Deep Throat". This, however, is simply Mamie planting information in the media to create a conspiracy against Nixon and take the attention off Thor. The extraterrestrials intend to discredit Nixon rather than kill him.

Kissinger, too, suggests Nixon's resignation is the best path. Nixon nearly tells him that he intends to spill all the secrets of the treaty instead, but Kissinger quickly exits before he can. Nixon is shortly thereafter abducted and probed, which compels him to resign after all.

By 1979, Mamie has faked her death and made her way to Area 51. Thor relates to her that his homeworld resembles the barren Death Valley and he welcomes her to her new home. On a tour of the dining room, Mamie meets Calico, and the two quickly get on.

Armed and armored security patrol the halls of the facility in search of Troy and Cal . Among other places, they search rooms including Mamie's. They find the two men's corpses on the Moon Landing set as Cal's progeny drops from the ceiling to crush a soldier's face. Theta and her team lament the excessive force the soldier's used to subdue the newborn. The scientists are concerned that traits that should have been eliminated have regressed into new subjects. For their overzealous destruction of the newborn, the soldiers are executed and replaced by their backup team.

Jamie and Kendall are summoned to the cafeteria along with the other subjects. They notice the men are missing, and ask Calico what is going on. The two do their own search and find the bodies on the set. Jamie and Kendall both spontaneously go into labor and Theta restrains them in the birthing lab. Jamie's progeny is delivered and quickly dispatched, soon after followed by Jamie herself.

When Kendall delivers, the newborn is "perfect" in Theta's eyes, and the hybrid doctor declares the long experiment over. Kendall says that the victory will be short lived and the invaders will find themselves bored and complacent now that they have done what they set out to do. Theta addresses Kendall's concerns by beheading the new mother with a laser scalpel. Technicians bring in a mechanical device to replace Kendall's head, leaving behind an ideal breeding machine.

Mamie celebrates a birthday alongside Calico (her only true friend) with a cupcake. Mamie is less enthusiastic now that she's immortal. They notice the cafeteria is abuzz with the excited news about the first successful full extraterrestrial hybrid. Thor relates to Mamie that the host womb will be cloned and the facility will quickly mass produce hybrids for conquering and replacing humanity. Mamie was unaware of this part of the plan, and that she will be one of the few humans spared genocide. Thor also discloses that the extraterrestrials long ago made treaty with the Reptilian race and they will share the Earth in absence of humans.

Mamie finds herself blocked from Theta's lab, but the doctor introduces herself and invites the former First Lady to see the newborn. Mamie is taken off-guard by the beauty of the newborn, who has enlarged eyes compared to humans. Kendall's body is nearby in the lab, and Mamie quickly recovers to condemn Theta's practice of reducing the woman to a machine. Theta reminds Mamie that humanity has given over most of their control to machines worldwide. Mamie realizes that Theta has not been informed of her superiors' plan to exterminate humanity.

Calico, too, is incredulous about the plan. Mamie suggests to her friend that they fight back. They plot getting close to the newborn and the Kendall-machine to destroy them and set back the extraterrestrial plan. Theta shows the two women the new developments: the gestation cycle has been accelerated to a newborn produced every day, soon to be optimized to hours of development between births. Mamie takes on the responsibility herself of killing the newborn and is quickly frozen in place by Theta. The doctor was not truly aligned with the women's conspiracy, and is ashamed of her human heritage. She takes the scalpel from Mamie and tells them that humanity has had its chance. Calico's reward is to be the spiritual mother for the new generation to come, and Theta explodes Mamie's head. Together, they deliver another perfect specimen.

Henry Kissinger was the 55th United States Secretary of State. 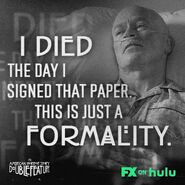 "Talk about late in life regrets." 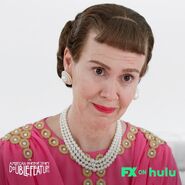 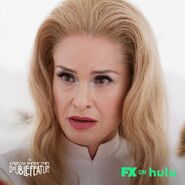