The Lady in White

View source
watch 02:56
Doctor Strange in The Multiverse o Madness - The Loop
Do you like this video?
Play Sound
This article is about the episode. For the character who goes by the same name, see Lavinia Richter.

The Lady in White

A hidden chapter of Camp Redwood is revealed. The survivors help a stranded hitchhiker.[1]

Camp Redwood was originally known as Camp Golden Star. Lavinia, a widowed mother, works as a chef at the camp so her sons, Benjamin and Bobby, can have a fun summer. In the mess hall, Bobby asks Lavinia if they could go swimming. Lavinia puts Benjamin to the task of watching his younger brother. Benjamin leaves Bobby to watch the lifeguard and a counselor hook up in the forest clearing. Bobby starts to swim and when Benjamin returns, he sees him swimming towards an active motor boat. Benjamin screams at the staff to stop the engine but it ends up being too late and blood fills the lake. Lavinia is distraught over the incident and blames the lifeguard, Benjamin and the rest of the staff for the death of her son.

Donna takes Brooke into a hotel room and tries to care for her, although Brooke is not compliant. Brooke is skeptical about Donna's intentions and threatens her for an answer. Donna explains that she is trying to make things right and Brooke sees a newspaper on the nightstand with Camp Redwood's event on the front page. Brooke wants to go to Redwood to watch Margaret die. Donna decides to treat Brooke for a fun day at the roller rink and the two enjoy their time together but, as they're about to leave, a man approaches them. He introduces himself as Bruce and asks for a ride to his girlfriend's place. Donna refuses his request and the two leave the rink.

When Donna tries to start her car, the engine sputters. Brooke and Donna open the hood to find the issue. Bruce emerges and decides to help them. Once the car starts up, Donna decides to give Bruce a ride out of kindness for helping them.

During the ride, Brooke becomes annoyed of Bruce. She senses that Bruce is trying to manipulate them and tells him that his ride is over. Donna pulls over to the side of the road and insists that Bruce get out. However, a cop car pulls up behind them. The cop approaches the vehicle and asks if everything is okay. Donna and Brooke tell the cop that Bruce talked them into giving him a ride. The cop tells them that there are fliers of women who have gone missing from the highway and Bruce pulls out his gun and shoots the officer. Donna puts the car into drive as Bruce begins to shoot at them. Bruce later shoots the cop again and takes his vehicle.

Richter returns to Camp Redwood and is confused to find Pete still dressed in his Mr. Jingles costume but Pete explains that he is dead. Keith and Larry show up and begin to attack Benjamin out of revenge for killing them. Pete stops them as Montana told everyone that there should be no killing until the festival and they bring Richter to Montana, Chet, Xavier, and Ray. The ghosts are infuriated over Richter killing most of them and demand to know why he has returned to the camp. Richter explains that he came to kill Richard Ramirez and questions if they're actually ghosts. They tell Richter that they don't have a passage of time and can still feel pain along with pleasure however, they're angry that they're bound to Camp Redwood. Richter questions as to why, since they don't have to deal with the real world. They explain that they are terrorized by a woman dressed in a white night gown, who chases them.

Richter realizes that the woman dressed in white is his mother and explains that Camp Redwood was known as Camp Golden Star back then. After Bobby's death, Lavinia was completely overcome with grief and rage that she slaughtered the staff one night. A young Benjamin walked into the scene and Lavinia beckoned him to hug her but Benjamin ran out instead, with his mother chasing him with a knife. When Lavinia finds Benjamin, he stabs her in the abdomen and kills her out of defense.

Richter asks the ghosts about his mother's whereabouts and Montana tells Xavier to take him. Xavier guides Richter back to an abandoned cabin. Richter enters alone and Lavinia greets him. She is disgusted with Richter and is distraught that she could never find Bobby despite hearing him. She pities Richter's son for having a father like him. Lavinia admits that she had watched Richter the entire time he was at Camp Redwood. She even admits to manipulating Margaret to carry out the 1970 massacre and blame Richter. She disappears, leaving a devastated Richter alone in the cabin.

Donna and Brooke believe they have gotten away from Bruce as they wait at a stoplight and a police car speeds towards them and rear ends the car. The two are knocked unconscious and later on, Brooke finds herself in the car with Bruce. Bruce gives her two options: She puts the car into drive and drag Donna who is tied to the car by a rope or he shoots Brooke and drags Donna himself. Brooke decides the first option and puts the car into reverse. Bruce is struck by the dashboard as he jolts forward. Donna unties herself and tries to choke Bruce with the rope but Brooke stops her and tells Donna that she has a better idea.

Margaret, Trevor, and Courtney are at Camp Redwood as they set up the music festival. A tour bus shows up and Limahl greets them. As Margaret talks to him, Trevor notices Montana's ghost and is surprised to see her. He goes to one of the clearings and Montana appears before him. Trevor is confused, knowing that she is dead and the two proceed to kiss.

Donna and Brooke tie up Bruce to a sign and cut off both thumbs so he can no longer hitchhike. Brooke decides to leave Donna and walk to Camp Redwood but Donna insists that she join her to see things go through to the end.

During the night, Limahl sees Richard Ramirez near the tour bus and asks what he's doing. Ramirez explains that he's a big fan and he's here to collect for Satan, revealing that Limahl and his band's successfulness was due to a pact with the Devil. Limahl tries to run, but Ramirez slashes Limahl's throat. Courtney walks into the tour bus with a basket of treats and screams as he sees that all the members of Kajagoogoo on the tour bus have been murdered.

Richter sits on the dock and Lavinia approaches him. She demands that he leave and that he doesn't deserve to grieve for Bobby but Richter explains that he misses him and even named his son after him. Lavinia encourages him to kill himself before Ramirez comes to collect him for Satan. Lavinia disappears and Richter ponders for a moment before he plunges his knife into his abdomen. His ghost pulls the knife out of his body and he leaves the dock.

Bobby Richter is a guest starring character in American Horror Story portrayed by Filip Alexander. Bobby was Benjamin's younger brother and one day during their summer in "Camp Golden Star" Benjamin was supposed to be watching over him. Despite his obligations Benjamin went off to spy on the couple in the bushes and Bobby decided to swim in the lake on his own. Not noticing the diving boy some men started a boat's engine and accidentally injured him in front of his brother. Bobby's mother, Lavinia, was inconsolable and blamed for the death of her beloved son not only Benjamin but also irresponsible counsellors.

During episode "Rest in Pieces" Benjamin was tied and thrown into the camp's lake on a boat and Bobby jumps up from the water and takes Benjamin under water. Benjamin wakes up and he is in heaven with Bobby and Lavinia. Bobby is last seen saying goodbye to his nephew, Bobby II.

Limahl is a guest starring character in American Horror Story portrayed by Misha Crosby. He is a fictionalized version of British musician Christopher Hamill, better known by his stage name Limahl, leader singer of the band Kajagoogoo. Limahl and the band Kajagoogoo, go to Redwood but they are killed shortly after by Richard Ramirez. Courtney picks up their bodies and Courtney then finds their ghosts. 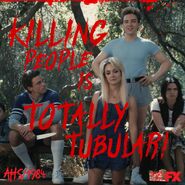