Jennifer Lynch
"The Morning After" is the second episode of Apocalypse. It premiered on September 19, 2018.[1]

A new occupant arrives at the Outpost with alarming news, causing a domino effect of lust, betrayal, and self-destruction.[2] Langdon meets the survivors for an inquisition. Strange signs herald something coming. Lovers unite, and loved ones turn on one another. Blood reveals mysterious truths.

Emily prepares for bed, but hears a strange noise: her room is crawling with snakes. Her screams bring The Fist and Mead. Mead rejoices at the new protein, despite the risk of contamination. The dinner companions discuss what they've been eating lately, including possibly Stu. Emily asks about the newcomer in Venable's office, to which the administrator responds that all questions will be answered in due time. The servants lift the cloches over dinner to reveal the snakes, unexpectedly alive, which slither across the table.

The dinner guests assemble in the library, and Langdon enters to approach Venable. The other American compounds in New York, West Virginia, and Texas have been overrun and destroyed. He explains the purpose of The Sanctuary and that he will be evaluating candidates for survival. Those not selected will be given suicide vials in case of further incursion. Evie explains that Gallant's volunteering to Langdon's "cooperation" technique is a survival trait.

In Venable's office, Langdon begins questioning Gallant. Questions range from sexual orientation to his anger. The probing questions go deeper, until they resemble confession. Gallant describes a dinner party where Evie tried to set him up with suitors she thought appropriate, which he deliberately ruined. Gallant speculates about Langdon's own sexual orientation, and Langdon suspends the remainder of the conversation, bidding Gallant to leave.

Gallant dreams of pentagrams, and Rubber Man knocks on his door. Gallant gives himself over to the suited figure, and Evie observes the two having loud sex. Disturbed, she walks away. She visits Mead in her chambers and tells the overseer about her grandson's indiscretions.

Elsewhere, Timothy and Emily wonder about Langdon, and resolve to find out more. The intrepid pair finds Langdon has a functional laptop, and discover inexplicable emails about Venable's administration. They are unaware they are being observed by Rubber Man overhead.

Langdon visits Venable to determine why she has been violating protocols and making her own rules. She says she was given secret orders, and he retorts that he drafted all such orders. They square off about who is really in charge of the Outpost. He relays a story about a woman and child covered in lesions from fallout exposure. He says he did not give them the satisfaction of mercy. Venable thinks none of her charges are worthy to move onto the Sanctuary (aside from Dinah, of whom she knows little). Langdon tells Venable to undress for a physical examination, which she rebuffs. He unzips her blouse to find she suffers from extreme scoliosis, which brings her great pain and shame. She asks if she has passed his test, and he says no. They are interrupted by Mead, who is summoning Venable. Mead relays Evie's tale and they suspect Langdon as the suited figure, neither knowing Rubber Man's true nature nor that Langdon overhears their plotting.

Venable interrogates a chained and nearly nude Gallant, while Mead whips him. Venable realizes that Gallant is enjoying being whipped, and the women walk away. Langdon enters, and Gallant says that he did not rat him out. Langdon insists he has never entered Gallant's room and that he too thinks that Gallant is pathetic. The Inquisitor tells Gallant that his own grandmother informed on him, and suggests that he should ask her himself as he releases him.

Dinah remarks on the song on the radio ("Time in a Bottle"), and Coco retorts that her own generation had the best of all choices and that nostalgia in the old was only because of lack of options. Gallant confronts Evie about turning him in, and she admits that she intends to be the last survivor. She regrets having to clean up after Gallant for years, and thinks she deserves to live more than he (or anyone else), as she is the living legacy of humanity's culture. He wanted acceptance from her, but she says that's not in her nature.

Timmy and Emily speculate on what Langdon's emails mean and why they were really chosen for survival. They realize that since Venable's rules are irrelevant, nothing is stopping them from having sex. They launch into lovemaking while Rubber Man watches from the shadows.

Gallant broods in the drawing room, and the radio shifts to "Gold Dust Woman". Gallant catches a glimpse of Rubber Man, whom he follows to a bedroom. The two begin to have sex, and Gallant grabs a nearby pair of shears to stab the figure in the chest. Gallant finds he's been discovered by Langdon, but when he looks back at the corpse below him he finds that he has killed his grandmother.

Mead intrudes on a sleeping Tim and Emily and drags them away. The young lovers confront Venable about her made-up rules, and she sends them to their punishment. Mead takes them to a chamber for execution where Tim shoots her in the torso in an escape attempt. She staggers away, revealing a torso full of white fluid and circuitry: Mead is an android or cyborg.

Walter is a character in Apocalypse portrayed by Jason Michael Snow. Walter was a lawyer when he decided to become "friends" with Evie. One day, Evie invited him and two other men to her house to become suitors for Gallant. When they saw him in "none approval" clothing they decided to leave.

Morris is a character in Apocalypse portrayed by Navaris Darson. Morris is a man who has many pet dogs. One day his "friend" Evie let him come to her house with two other men to be suitors for Gallant. When they saw the "none approval" clothes he was wearing they decided they wanted nothing to do with him.

Mario Vestri is a character in Apocalypse portrayed by Chris Ferro. Mario was a manager at Pottery Barn when he decided to become "friends" with Evie. One day, Evie invited Mario and two other men to her house to become suitors for Gallant. When they saw Gallant in "none approval clothes" they decided they did not want him. 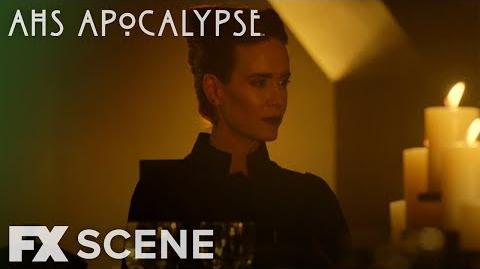 Retrieved from "https://americanhorrorstory.fandom.com/wiki/The_Morning_After?oldid=149080"
Community content is available under CC-BY-SA unless otherwise noted.