"The Naughty List" is the fourth episode of American Horror Stories. It was released for streaming on Thursday July 29, 2021 on FX on Hulu.

A group of influencers face a reckoning after posting a problematic video online.[1]

Zinn introduces "The Bro House", a reality streaming show where he lives with his influencer friends Wyatt, James, and Barry. 5 days prior to Christmas, they film a man about to jump from a bridge in a suicide attempt. Rather than try to stop him, they document it for their stream. Barry mentions that they won't be able to post it, but Zinn convinces him to follow the body to where it fell in an aqueduct.

Later at a Christmas party, Zinn is still trying to convince Barry to post, reminding him that they are about to age out of their influencer careers. They upload while the partygoers watch the new posting live, expecting the new content will push them over 5 million subscribers. Instead, the disgusted guests begin leaving. Overnight, the backlash has lost them millions of viewers and prompts thousands of angry comments, petitions to deplatform the four, and a press conference from the dead man's family. They refuse to apologize to pander sympathy, and instead start discussing gay-oriented stunts to boost popularity. Again, Barry objects and Wyatt agrees that such content would be exploitative and far worse. The argument goes unfinished as movers arrive to repossess promotional items around the house, as the four just lost their sponsorship. Their next video features Zinn and Wyatt complimenting each other while they exercise, each sentence punctuated with "no homo". The audience can tell how inauthentic the videos have become, and more backlash ensues.

Barry suggests they return to their authentic roots, and the men agree. They walk through a mall, and decide to visit a Santa's Workshop. The "elf" assisting at the installation recognizes them and after some rude innuendo she insists they leave. Barry continues to film as the other three invade, spoiling the experience for all the attending children. Zinn decides to give Santa a twerking lap dance and Santa insists the men will get what they deserve. They run from security as Santa looks on.

Back at the house on Christmas Eve, the four post the new video over Barry's protests. Wyatt suggests that Barry may no longer be a good fit for the group and that he should move out. This leads to a verbal fight, which Zinn and James try to break up. The immediate comments on the video start to roll in, and the followers continue to leave. Wyatt wanders to the garage, and Zinn receives a phone call from the police.

The detective has questions about the incident at the mall. She mentions that the Santa at the installation was not the man hired for the job; the hired Santa was just found dead in his own home. She wants the men to come the next morning to the police along with the recording. She looks at the dismembered corpse, stuffed into a gift box. The detective has told Zinn that there is a pattern of replaced mall Santas across the country.

Wyatt finds an unexpected camera in the back of the refrigerator, but before he can investigate it he is attacked from behind. "Santa" twists around Wyatt's head 180º, sure to get the snap on the recording. Before anyone notices he is gone, the remaining three notice a new upload of his comeuppance. While James thinks it is a prank, Zinn goes to talk to Wyatt. The "likes" pour in, and Barry decides to delete it regardless. Moments later, the video re-appears with a link to a news article about the "true" origins of the Santa mythos: a wild man who punished the naughty.

Zinn does not find the camera, but does find the killer. The older man beats Zinn with a club, wraps him in a string of lights, and stuffs his mouth full of mistletoe before tossing him into the pool. Zinn's electrocution knocks out the power to the house.

Seeing their friend's corpse, James calls the emergency hotline. The dispatcher is reluctant to send police to the well-known address, thinking it is a prank. They try to leave, seeing the new execution quickly uploaded to their channel. The killer, firing a crossbow from the roof, pins James to the hood of the car before shooting a bolt through his head. Barry, shot through the thigh, crawls back into the safety of the house and locks himself in. He can not call for help, as his phone was destroyed by the same bolt. He wraps the wound in his mantle stocking as he hears the killer approach.

The chimes of the channel's comments remind Barry that there is a laptop nearby. He tries to comment for help about being attacked, but his comment is disregarded as evidence of a prank. Thinking the killer is about the come down the chimney, Barry finds the killer is instead pouring gasoline down the shaft. Barry is alerted that the channel has hit five million followers after all. His celebration is short lived as he is forced to flee into the pool: the killer has ignited the trail of gasoline and Barry is engulfed in flames.

The next morning, the police detective finds the house's Christmas tree trimmed with dismembered parts of the house's Bros.

Elsewhere, the killer has found a new mall Santa to target.

"Santa" is a character in American Horror Stories portrayed by Danny Trejo.

"Some people have more gifts than others..." 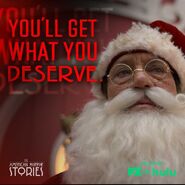 "So be good for goodness sake."