disposition2=proven|option2=Tate has an alter ego. In the pilot episode, Tate describes his "fantasies" to Ben, which include him strolling through a busy highschool hallway dressed in civil war attire and skull makeup with his hair slicked back. In actuality, as it is shown in "Piggy Piggy", Tate wore the jacket to the school shooting but kept his hair and face the way it usually is. It could be presumed that Tate's fantasy of his school shooting could be his imagining of how he sees himself/ or an effect from the crystal meth he is seen snorting that morning. Another part that shows this is later in the pilot when Tate writes "Taint" on Violet's chalkboard in her room, in no relation to anything currently happening in the plot. It is likely, him being a psychopath, that Tate created an alter ego for himself to cope with the violent deeds he seems to remorse and grieve about over time. |disposition4 = proven 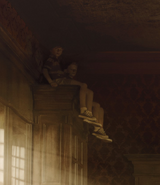 Does the boy look ALOT like Tate to anyone else??
Add a photo to this gallery
Retrieved from "https://americanhorrorstory.fandom.com/wiki/Theory:What_is_Tate%3F?oldid=38855"
Community content is available under CC-BY-SA unless otherwise noted.