Cardinal (formerly Monsignor) Timothy Howard is the director of the Briarcliff Manor Sanitarium through the majority of the story, during which he carries the title of "The Reverend Monsignor"[3]. He is a character in Asylum portrayed by Joseph Fiennes. By the time of his death he had ascended to the rank of "His Eminence, Timothy Cardinal Howard, Archbishop of New York".

Monsignor Howard ranked over Sister Jude in authority at Briarcliff Manor, where he was also the subject of her fantasies. His ultimate goal in life is to see Briarcliff become a place of such renown promise that he aspires to, and does become Archbishop of New York, and later, he hopes to ascend to the office of Pope. However, he is willing to lie and cheat his way to the top of the Catholic church, prepared to be corrupt in order to better his own social standing in the church. He was also willing to turn a blind eye to many of the abject horrors in Briarcliff, simply to advance his own career, showing he was an amoral hypocrite. He was also weak-willed, having been quickly manipulated and blackmailed by Dr. Arden to conceal the horrors of his medical experiments; however, he saw this as necessary to advance his own career, again showing his absence of morals. After his suicide, Lana Winters branded him so self-serving, deluded, arrogant and pathologically deceptive that he was incapable of realising his own lies, resulting in him taking his own life rather than to admit his failures in public.

He is ambitious and has aspirations of becoming a bishop of the archdiocese, and intends to keep Sr. Jude at his side.[4] He was instrumental, with Dr. Thredson, in the exorcism and resulting death of Jed Potter, especially after visiting priest Father Malachi was incapacitated by the demon's power.[5]

He confronts Sr. Jude regarding her reported inebriation during the storm,[6] suggesting this might be behind her "unfounded" accusations against Dr. Arden. In reality, for ambitious reasons, he is in league with Arden, both defending him against and warning him of the encroaching suspicions of the law and Sr. Jude.[7] He was, however, unaware of the true nature of Arden's experiments. This changed after his encounter with the horribly-mutated Shelley in a local hospital.[8] Disgusted at the effects Arden's mutation on Shelley, the scientist goes from being a beacon of hope to a monster in Timothy's eyes. Despite his sudden change of heart, Arden silents the Monsignor reminding him that he allowed the mutations to take place and would be held accountable as an accomplice.

Sister Jude goes through an array of unfortunate events and ultimately finds herself in the most precarious of predicaments. After surviving a near-death encounter with Leigh Emerson Jude awakens tied to a bed and Timothy, sitting next to her, mournfully fills Jude in on, what he has been manipulated into believing, her crimes. He strips Sister Jude of her title and announces that she is now a permanent inmate at Briarcliff.

Timothy visits Leigh in the sanctuary. The mass murderer's, seemingly, contrite and tamed disposition baits the Monsignor into considering redeeming the fallen man. Leigh persuades him of his dedication to living in the right and Timothy agrees to baptize him to usher in Leigh's rebirth. After the baptizing Leigh reveals his true motives when he quickly grabs Timothy and forces his head underwater, keeping it there until he is unconscious. He finishes the Monsignor off by crucifying him to the sanctuary's cross, leaving him there to die. Shachath appears before the dying priest, and he pleads for her to take him. The angel tells him that the devil resides inside Sister Mary Eunice and that it is his duty to cast her out.

He returns to the sanitarium and is attended to, dutifully, by Sister Mary Eunice. In every encounter, Timothy is visibly nervous of being in her presence. It is while she is tending to his wounds distracted by her own ramblings that Timothy Howard quickly grips the Sister and places his rosary upon her forehead and attempts to exorcise her. It appears that the bold maneuver only slightly flusters the demon who quickly brushes the Monsignor off, sending him flying back into his bed. His body pinned down and his arms outstretched at both sides, again crucified, forced into this position by unseen force Timothy finds himself at the mercy of Sister Mary Eunice as she mounts him. As she undresses and gyrates atop of Timothy she taunts and toys with the priest, ignoring his pleas for her to stop. Ultimately she rapes him, an absolute violation for a man of such stature.

Timothy visits a catatonic Jude, sobbing over being robbed of his virtue and asks for her help. She tells him that he has to kill Mary Eunice. The monsignor returns to Mary's office and prays until he is again confronted by the demon. Mary taunts him with her body again, he rejects. She then promises to fulfill his ambitions as she rehashes her plan that includes the Vatican and him as pope. Timothy eyes widen at the proposition but, clinging to his virtue, he declines. Mary Eunice walks out to the landing of the asylums stairway berating Timothy as she departs. Timothy shoots back and reminds the demon that he can sense the real Mary Eunice and will cast it out. At that, Mary lashes out and grabs the monsignor by his shoulders and pins him against the stair railing. The demon promises to omit the priest from any future plans and to also eradicate any remaining reminisce of Mary's soul. At this, the real Sister Mary Eunice breaks free and cries out to the Monsignor. She is tired and no longer can fight the demon, she is ready to let go. Timothy softly tells her to then let him go, she obliges, and swiftly he grabs Mary and tosses her over the railing. She falls to her death, effectively killing both the nun and the demon inside her.

Timothy and a couple nuns appear in the common room to Thomas, Kit Walker, and Grace Bertrand[9] Timothy takes Thomas away, wanting to place him in an orphanage as he feels Kit and Grace are not fit to raise a child since they are both patients in Briarcliff. Timothy reads Lana Winters's published the article where he is specially ousted for allowing Bloody Face to work at Briarcliff, and realizes that Briarcliff is being threatened. Jude appears to Timothy in the common room, stating how ironic it is that he was robbed of his virtue by the devil, and continues to challenge him until Timothy orders her to be sent to solitary. When Kit is freed, he requests that he gets his baby back and that Grace leaves too. Timothy refuses but Kit argues that Grace is still officially presumed dead so he doesn't have to lie and Kit doesn't have to tell the truth about Briarcliff and forces Timothy's hand. Lana and two police officers come into his office with a court order wanting to talk to Jude. Timothy tells them that Jude committed suicide and even shows them a death certificate. In reality, the death certificate is a forgery and Jude still lives in solitary with a new name. Howard interrupts a game of Candyland, telling Judy (renamed "Betty Drake") that he is releasing her, as he has been elevated to the rank of Cardinal, and been named Archbishop of New York, and the cruelty must end. Judy demands to see Cardinal Howard and realizes she has been trapped for 2 ½ years since the transition and that Pepper has been a hallucination since her death (around the same time). During Lana's interview in the present day, she reveals that she conducted an expose, one on Cardinal Howard and Dr. Arden that exposed Howard's awareness of Arden conducting human experiments while serving as a doctor at Briarcliff. The Cardinal denies the mistreatment on camera and speeds off in his car. The Cardinal would later commit suicide by slitting his wrists in a bathtub, following Lana's expose.[10] 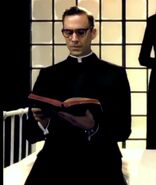