Bradley Buecker
"Tricks and Treats" is the second episode of Asylum. It premiered October 24, 2012.

Dr. Thredson arrives at Briarcliff as Kit's court-appointed therapist to determine if he is competent to stand trial for the "Bloody Face" murders. "Bloody Face" kills people in both time periods, present and 1964. Meanwhile, an exorcist is called to the asylum after a teenager's behavior goes beyond clinical help; he is possessed by a demon. The ritual gives Lana and Grace a chance to escape, but Lana, who feels betrayed that Grace wants Kit to go with them, foils the plan by getting Grace and Kit caught. The possessed teenager exposes Sister Jude's dark past that haunts her to this day, revealing that she used to be a sleazy bar singer who accidentally hit a little girl on a bicycle while driving drunk in 1949. The teenager dies after the demon exits his body during the exorcism and enters Sister Mary Eunice instead.

Teresa runs screaming from Bloody Face. He chases her to the main hall, where she tries to save Leo, but ends up leaving him and retreating into the room where his arm was ripped off. She watches through a slit in the door and screams as Bloody Face repeatedly stabs Leo. Bloody Face straightens up and then beats on the door.

Wendy is crying to her friends over the blackmail on the night before Halloween. She takes a shower and makes the mistake of leaving the window open. She is later confronted by Bloody Face, who presumably kills her. Back at the asylum, Sister Jude is doing room checks. A list of grievances is confiscated from Lana's cell. Sister Jude wants to erase Lana's memory and has Dr. Arden perform electric shock therapy on her. Later, Dr. Thredson arrives and speaks with Kit. Kit insists that he is not crazy, and Alma truly was abducted, but Dr. Thredson says he's manipulative and diagnoses him with acute clinical insanity. Near the woods, Dr. Arden and Sister Mary Eunice meet and talk about the creatures of the woods. Sr. Mary asks what they are, and Dr. Arden tells her he will let her know in good time, then kindly offers her a candy apple, which she is reluctant to take, but ends up taking a bite. Lana has brief memories of the electric shock therapy, but alas she remembers everything. Lana overhears Kit and Grace planning to escape. Dr. Thredson has a talk with Sr. Jude and expresses his belief that the asylum is barbaric in its treatment methods. Sr. Jude has a chat with a concerned family, and Dr. Thredson interrupts. The family informs them their son, Jed, has begun hearing voices and seeing things that aren't there, and ripped out and ate the heart of a cow. They expressed the belief that he may be possessed by a demon. They go to see Jed in his room, his body completely twisted. He cries that he is scared and does not know where he is before speaking his horrific language.

Back at the asylum, Lana tells Grace of the tunnel she used to enter the manor by and plans an escape but insists she must not tell Kit. The Monsignor and visiting wheelchair-bound priest Father Malachi perform an exorcism on Jed with the church-mandated presence of a doctor: Dr. Thredson. Lights flicker, pseudo-Latin is spoken and objects and bodies are flung across the room. Jed, with seemingly omniscient knowledge, confronts Sister Jude on a past that includes drunken promiscuity and manslaughter. He mocks Jude, saying "You're a murderer Judy!", causing her to snap and attack him. The Monsignor comes in and drags her out of the room.

In the mayhem that apparently results from the demons rage, all the locked cells open and Lana takes advantage of the opportunity to escape with Grace. Kit catches up to them, and after Lana refuses to include him, he and Grace go off on their own. Lana screams for the guards that Kit is escaping, and he and Grace are captured. Lana looks on in tears, feeling guilty for having Grace caught.

Jed's rage continues and Dr. Thredson administers a sedative. It has no effect and Jed enters cardiac arrest and grows still. Dr. Thredson makes an attempt at CPR before pronouncing him dead. A crucifix on the wall above the bed falls; there is a final flickering of light behind Sister Mary in the doorway; she appears to faint, but is knocked backward by an unseen force.

Dr. Arden, having heard of Mary's fainting, goes to check on her. She is asleep on a cot with blankets thrown off and wearing only a nightshirt. Though clearly tempted by her exposed body he feigns to protect her modesty by adjusting her gown, which causes her to wake. He expresses concern for her well-being, but still glimpsing a hint of her breasts through her shirt, he turns away explaining that it is disconcerting to see her out of costume. She pulls the blankets to her chin and apologizes for telling him she feels comfortable with him. As he leaves the room she lies back down and forcefully throws the blankets off. A crucifix on the wall shakes.

Sister Jude praises Lana for sacrificing her own freedom to stop Kit. She tells her she gets a reward, inviting Kit and Grace into the office and allowing Lana to pick the cane with which they are to be punished. Before the Sister can proceed, Kit tells Grace to stand up and takes the entire blame on himself. Jude accepts this but doubles Kit's punishment to 40 lashes.

Jed Potter is a guest character on Asylum. He is a 17-year-old boy admitted to Briarcliff Manor by his parents after he is found in the family barn having disemboweled their best cow and muttering an unknown language while under the possession of a demonic entity. It is unknown how Jed was possessed by a demon in the first place. After his death, Sister Mary Eunice was then under its control. During his brief time in the sanatorium, he mocks Sister Jude about supposedly killing Missy Stone.

Jed Potter is mentioned by Dr. Oliver Thredson in "Nor'easter". Jed also appears in a flashback in "Dark Cousin".

Father Malachi is a paraplegic priest who comes to Briarcliff Manor to aid in the exorcism of Jed Potter. His name is perhaps inspired by a real-world Catholic priest, author, and exorcist Malachi Martin. Sister Jude is present as Dr. Thredson assesses Jed, and realizes that the boy has been possessed by a demonic entity of some kind. She and the Monsignor call upon Father Malachi to attend to the boy and perform an exorcism on the premises. Dr. Thredson immediately objects to his presence and the notion that an exorcism could cure what he believed to be a severe psychiatric condition. Father Malachi overhears Dr. Thredson's protest and tells him that he is happy to have non-believers in the room while he performs exorcisms, as it "ups his game". The exorcism goes ahead and Father Malachi sits beside Jed's bed and attempts to use passages from the Bible to cast away the demon. Jed, while succumbed to the demon, looks straight at Father Malachi and telekinetically throws him from his chair and slams him into the wall. The exorcism has ultimately deemed a success when Jed dies and the demon has ostensibly disappeared. Father Malachi leaves Briarcliff, unaware that the demon had simply jumped hosts and entered the body of Sister Mary Eunice instead.

Mr. Potter and Cynthia Potter are guest characters on Asylum. They're Jed Potter's terrified parents, who first seeks help at Briarcliff Manor, and then to the care of an exorcist in order to heal their son from the evil that afflicts him. When their son dies they are devastated and they leave.

Lois is a character in Asylum. Lois comforts Wendy about selling out Lana and Lois later appears when Lana is burying Wendy.

Barb is a character in Asylum. Barb comforts Wendy after she sells out Lana. Barb is later seen at the burying of Wendy.

The Prostitute was a guest character who was portrayed by Jenny Wade.

The Prostitute is an unidentified young prostitute who was called by Arthur Arden under the name "Stanley" to amuse him by dressing up as his love interest, Sister Mary Eunice.

When she first arrived, The Prostitute was very curious about why Dr. Arden wanted to have a dinner with her and every time she tried to seduce him, he would creep her out by stabbing dinner knives in the table for instance. While she is dressing up as Sister Mary Eunice, she finds a book full of disturbing images and Dr. Arden walks in demanding her to get on the bed to pleasure him. When he gets closer to her, The Prostitute then bites his hand, and escapes. 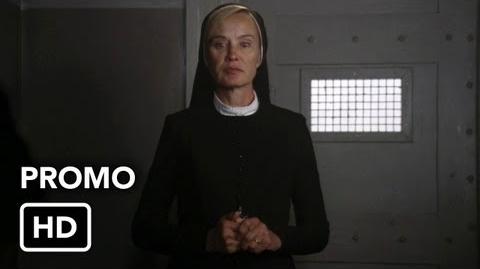