Vendela is a Scandinavian tourist. She is a character in Hotel portrayed by Kamilla Alnes.

Vendela is a tall, beautiful Scandinavian girl vacationing in Los Angeles with her friend, Agnetha. She speaks Swedish and limited English.

Vendela is a tourist who came to LA with her friend Agnetha to have fun and visit the Universal Studios. When checking into the hotel, she decides that it's not what they were looking for and she asks for their deposit money back but Iris says that the hotel doesn't do refunds. As they don't have enough money for another hotel, Vendela and Agnetha decide to stay there for the night that they have booked.

When coming into the room, Agnetha sends her to get some ice. On her trip to the ice machine, she finds the laundress Miss Evers cleaning a bloody mattress. She sees the Countess' children pointing in random directions with nothing there. While getting ice, Elizabeth tries to kill her with her chain mail glove but when touching her hair, Vendela turns back and she disappears.

Vendela goes back to her room and finds Agnetha lighting candles to get rid of a smell. She calls the reception and tries to get them moved to another room but Iris says there's nothing available. Agnetha works out that the smell is coming from their mattress. When they take off the sheets, they discover a line of crude stitching running down the length of the mattress. Despite Agnetha's warning about damaging hotel property, Vendela takes a knife and cuts open the mattress to see what lies beneath. The girls step back from the bed and an arm shoots up from the filling. The Mattress Man begins to crawl out, scaring the girls half to death.

Iris convinces them to stay at the hotel until the police come for an interview. While they wait, Iris settles them in Room 64. Vendela falls asleep until the alarm clock (probably in her imagination) starts playing jazz at 2:25 am. She wakes up and finds Agnetha being eaten by Elizabeth's kids on the bathroom floor.

Later, the girls are shown in cages in what used to be an entertainment room. Iris shows up and chastises them for the pills she found while rummaging through their luggage, telling them that their bodies need to be cleansed. Iris gives them "healthy" cocktails made of animal inwards, intended to purify their blood for drinking. Sally appears and asks Iris to leave. She then releases Vendela, but while trying to escape the Countess stops her and slices her throat.[1]

Agnetha later dies of blood loss, and her body is sent down a chute to a room where Vendela's body was dumped.

Vendela and Agnetha run into Donovan in the hotel penthouse, where they ask for directions on how to visit the Fast & Furious at Universal Studios. Donovan confirms Vendela's suspicion that they are dead. The girls are ghosts, who have been wandering aimlessly around the hotel corridors since their deaths. He tells them that there is no way out, but that their 'hamster wheel' existence will be less meaningless if they can find a purpose.

Later, Vendela's friend Agnetha comes across Mr Wu in a hallway and he invites her to his room. They have sex, and Vendela appears at the foot of the bed and requests to join them. Mr Wu refuses, believing the girls to be prostitutes who are trying to 'tag team' him and then charge him for the night. He retreats to the ensuite, telling Vendela and Agnetha to be gone by the time he emerges. Vendela takes a knife and follows him. Mr Wu cries out and then stumbles back into the bedroom, bleeding heavily from Vendela's stab wounds. Vendela watches as a naked Agnetha leaps onto him for a piggyback as he bleeds out, crying out about her Fast & Furious ride.

In the aftermath of Mr Wu's death, Vendela and Agnetha sit on the bedroom floor and lament their lack of purpose. Alex finds the girls and says that their purpose might be useful to John who has always wanted two girls. The girls find John in a hallway and take him back to his room where they have a threesome, but blood appears out of no where, making John uncomfortable and he leaves. When John goes back to his room he finds the girls walking out. Vendela and Agnetha are seen at the "ghost meeting" where it is shown the two have started a relationship with Wu. Agnetha and Vendela are seen when Liz wants her "family" to kill her, but Elizabeth kills her instead of the family.

Agnetha is Vendela's close friend from Sweden. The girls traveled to the United States together for a holiday and booked a room at the Hotel Cortez for its alleged proximity to Universal Studios. Agnetha appears to have weaker English skill than Vendela, as she relied on Vendela to do most of the translating when they first arrive. After Vendela's death, she finds the ghost of her friend Agnetha and they begin to roam around the hotel together.

Mr Wu is a Cortez ghost who encounters Vendela's friend Agnetha in the corridor outside his room. He seduces her, and Vendela requests to join them. When he refuses, Vendela ambushes him in the ensuite and stabs him. Having died on the Hotel Cortez premises, Mr Wu soon reappears as a ghost. Mr Wu is next seen sitting at the bar and flirting with the girls, apparently harboring no grudge over their role in his death. In death, he becomes Vendela and Agnetha's shared sex partner. 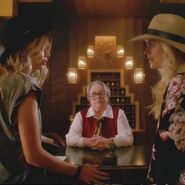