Start a Wiki
watch 01:51
The Loop (TV)
Do you like this video?
For: The massacre committed at the school
Westfield High is a public high school attended by Violet upon her family's move to Los Angeles. Other known students (past and present) are Leah, Becca (portrayed by Christian Serratos), Abby (portrayed by Bianca Lawson), and Tate.

Tate attended Westfield High in the early 1990s. In 1994, he killed 15 of his schoolmates in a shooting spree (only five of which have been on the show so far). Tate confesses to Violet that he was thrown out of Westfield High, and that he hated his time there. It is unknown whether Tate really was expelled prior to his shooting spree or if this was a lie/false memory. 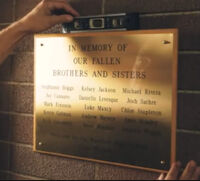 A Memorial plaque honoring the students who died in the shooting now hangs in the school[1][2]. It states:

Retrieved from "https://americanhorrorstory.fandom.com/wiki/Westfield_High?oldid=143332"
Community content is available under CC-BY-SA unless otherwise noted.