John J. Gray
"Winter Kills" is the sixth episode of Double Feature. It premiered September 22, 2021. It is the final episode of Part 1, titled "Red Tide".

The Provincetown harbor master warns fisherman Tony of an oncoming storm altering the tides. Before the small craft can leave the harbor, they collide with the floating corpse of Chief Burleson. The town council (including Holden Vaughn) is notified by Trooper Jan Remy of the Massachusetts State Police of the located body, with an added report that similar wounds have been found on an epidemic of bodies: throats slashed with uneven wounds and near total exsanguination. Remy believes there is a serial killer at work causing a string of brutal murders, but the town council suggests there is no evidence of murder. The council chair writes them off as "wintertime problems" — strange things happen on the Cape in the winter. They accept it as the price of living in a special place, and that it will drive away tourist revenue if they make it public. Remy responds that she knows they are hiding something, and does not appreciate impeding the investigation. After Remy leaves, Vaughn tells the councilors he will take care of it.

Vaughn meets with The Chemist, Austin Sommers, and Belle Noir. He is fully aware of their activities and the Pale. The writers blame the "Hollywood" people, but the Chemist reminds them that she instructed the pair to get rid of them. The Council insists that the Muse users will be crushed by bureaucracy if they don't make the problems go away.

Ursula looks over Harry's latest work, calling it a masterpiece. He has written five years worth of material, and he announces that they are all going to permanently stop using Muse. Alma calls him selfish, and that they don't have to stop. Ursula partially agrees that there is some truth to Alma's claims of superiority. Harry wants to regain some of his morality and humanity, but Ursula argues that this is simply what success looks like. Harry pleads with Alma that he will be able to be with her full time and support her. Alma tells him that she trusts him, and they embrace; by the look she gives Ursula, it is clear Alma has no intention of complying.

The next day, the Gardners shop for vitamins and supplements to ease their transition off Muse. Harry spots a figure outside the window. Alma insists that he needs to let Doris go, and that her mother isn't even a person anymore. They notice that the door jamb of the kitchen door has been broken. Harry runs upstairs to find baby Eli has been taken; Belle left a note that she has taken custody of the newborn. She threatens the baby's safety if Harry and Alma aren't at Belle's house at sundown. Though they know it is a trap, Alma says that she is not afraid. Ursula refuses to go with them, but has a plan.

Ursula enters the graveyard to get the attention of the Pale. She pleads her case that they deserve second chances. She holds out a bottle and says that there is a new formula of Muse with no side effects and that might undo the damage that ravaged their bodies. She offers them the cure if they attack the artists, though it seems they are not listening to her as they surround her.

Harry and Alma rush to Belle's, where the woman has Eli staged as an appetizer. Harry begs that they will leave and never return. The Chemist, who enters with Austin, says they will be back when the pill supply runs out. Belle and Austin don't believe his claims that the Gardners can get off the pills, and approach father and daughter with knives. They corner the family, who are saved by a sudden intrusion of the Pale through the windows. The talentless hack their way into Belle and Austin, fatally ripping their throats. The Pale turn attention to the Gardners, but Ursula shoots the would-be attackers before they can reach the family. The Chemist carries Eli towards Harry, and is intercepted by Ursula. Harry is relieved that they can all return to normal, though Alma – while hugging him – tells him that she will not allow him to stop her from achieving greatness. Alma sinks her teeth into her father's neck.

While Alma drinks her fill, the Chemist and Ursula discuss the new pills. The Chemist discloses that the new pills are an old and discarded formula that changes the behavior to make the pill-takers attack each other. Ursula says she can spin a story where Harry takes all of the blame for the deaths, while setting up The Chemist to distribute in Los Angeles.

Three months later, a Pale man – once a LAPD officer — attacks a tourist on Hollywood Boulevard. His colleagues arrive to gun him down. The news coverage claims that the Pale officer was known to be a "bad apple", one of several recent incidents of police shooting police who had a history of racial complaints. The Chemist turns off the news, addressing Alma's concern that she shouldn't mess with police. The Chemist insists the risks are minimal because of military secrecy concerns, and that she is performing a community service now that she has everything she wants. Ursula enters after a long day of dealing with agents and pushing Muse to writers at Starbucks. The Chemist and Alma have concerns, but they gloss over them. Alma says she is ready for the next step, an audition, but that she could use something to eat first. Ursula has left her a hustler to eat in the pool house.

Alma is one of two finalists after the audition for a philharmonic first chair. She is left alone with the other, Rory, a Juilliard-graduate prodigy that she insists she is better than. He says that she is not unique in her talent, but that her novelty if she gets the spot will be a fad that will burn her out and make her hard to collaborate with others. He is missing when the auditioners return, and his body is quickly found with throat torn out.

A seminar lecturer throws out an attendee who can not understand the complex text of the lecture, a detailed and overcomplicated view of story crafting structure in screenwriting. The lecturer introduces Ursula to the crowd, and she has given them all a sample of Muse. The lecturer objects, but she rebuffs him. She tells the crowd that success is one swallow away. Most of the crowd takes the pill in front of her. We soon see the streets filled with hungry Pale as The Chemist looks on. The streets of Los Angeles burn as she drives away with Eli.

Jan Remy is a trooper from Massachusetts State Police that went to Provincetown to run an investigation on the murder of Chief Burleson.

Rory is a prodigy musician running for the spot as First Chair of the Los Angeles Philharmonic, against Alma Gardner. 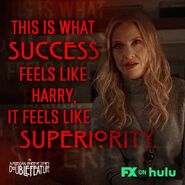 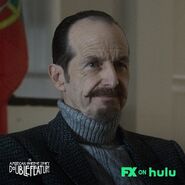 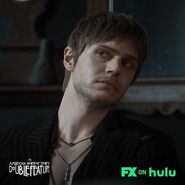 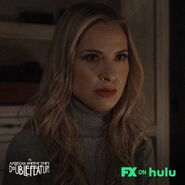 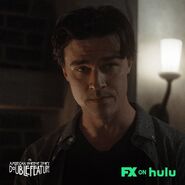 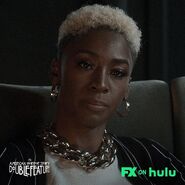 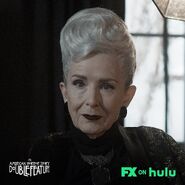 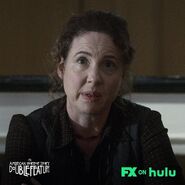 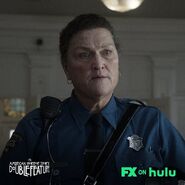