Winter of Our Discontent

Winter of Our Discontent

"Winter of Our Discontent" is the eighth episode of Cult. It premiered on October 24, 2017.

Ally is released from the psych ward. Vincent conspires against Kai. Samuels and Winter's loyalty is put to the test.[1]

Several movement followers emerge from Kai's house as Rudy arrives. Rudy congratulates his brother on his win. They discuss Ally's actions. Rudy says that he is proud of his brother's accomplishments to make a difference and that he wants to help expand Kai's message nationally. A hug ends with Kai's request that Rudy now addresses him as "Councilman".

At the restaurant, Ivy and Winter serve several of the followers, who scorn the food for being healthy and make harassing and belittling comments about the women. Beverly, who is also working in the kitchen, says that their plan to topple the patriarchy died when Kai developed an army. She recounts the last night's city council meeting, where Kai introduced his army of followers as an officially armed patrol for the city. One councilman named Perry objected, and Kai unsubtly threatened his daughters, which changed the councilman's vote. Beverly wants to attack Kai, but Winter defends her brother. Beverly urges Winter that Kai considers her expendable.

Winter recounts a story where she and Kai infiltrated an ultra-conservative religious order via an internet chat room. They proceeded through a sequence of rooms. One included a mother being tortured for aborting her fetus. Another had a junkie strapped to a frame, forced to overdose on drugs. Another featured a gay man whose judgment is meant to be impalement by knives through the chest, but Winter and Kai rescued him and the others throughout. Winter reached the door and was confronted by the deranged Pastor Charles, who was, in turn, knocked out by Kai. When the pastor awakened, Kai has strapped him down. Kai explained that the expectant mother actually had only an infection, the junkie was kidnapped from rehab, and the gay man was volunteering at an AIDS clinic. Kai dispensed the same "justice" to him that Pastor Charles inflicted, impaling him on the knives. After that, Winter recounts, Kai went darker and became more intent on righting wrongs.

Winter intends for the story to convince the other women of Kai's goodness. Winter says she will intercede, and that Kai will listen to her. Beverly is skeptical, and vows to take her own action if their situation does not change by the end of the week.

Winter visits Kai in the inner sanctum. He says he intended Harrison to work in the kitchen, until they killed him. He sits with his pinky at the ready, and Winter joins him. He explains that her total loyalty is required, and he's about to explain to her her role. He breaks off the pinky ritual and says that Winter is to bear the new Messiah. She is horrified at the thought of incest, but he explains that Samuels is to act as a medium between them. As Samuels inseminates Winter, Kai intends to be inseminating him, leaving her "pure".

Rudy committed Ally for three weeks, and now won't leave her house. She says he didn't believe her before, but he responds that he does now and that Kai is dangerous. Showing her a family photograph, he explains that Kai is his brother. Ally also realizes that Winter (Ivy's new lover) is Kai and Rudy's sister. She suddenly realizes that Kai accessed Rudy's files on her and he says he will ensure that Ally is reunited with Oz.

A robed Samuels and Winter await Kai in the inner sanctum, and Kai tells them that the time of "anointing" is at hand. He launches All 4 One's "I Swear" to begin the ritual to take place (which he considers a holy song now). The men disrobe and he anoints her with oil. She lays down at his bidding, and he kisses Samuels. Following Kai's instructions, Samuels is to enter Winter, but cannot get erect. Kai explains that this isn't sex, it's holy ritual. Winter and Samuels object, and Kai insists that "no one is above the law".

Ally cooks in her kitchen and invites Kai in for dinner. He enters, flanked by bodyguards. She says that she didn't invite him to threaten him, but to offer information. Ally asks for a moment alone with Kai, and he reluctantly sends the bodyguards aside. She wants a promise of Oz back in exchange for what she has to say. She tells him that Rudy intends to commit Kai, and she details his upcoming betrayal. She says that Kai's actions ultimately have cured her of her fears. With that, Kai decides he will eat her offered food after all.

Winter picks up trash in an orange jumpsuit and dunce cap. Samuels arrives in a car, calling her "servant", to bring her gruel. Her penance is to pick up the trash, but she will also throw it back onto the ground as Kai does not believe in global warming. He denies her an apple, and he tells her how he met Kai (who was using Rudy's prescription pad to sell fake prescriptions). Samuels blackmailed Kai into being his partner. Kai entered Samuels' apartment (full of Nazi memorabilia), finding him unable to stay erect for a woman (who stormed out) without strangling her. Kai explained to him that Samuels was unsatisfied with women, and that he needed a man. The two had sex, and Samuels continues to insist to Winter that he's not gay, "it's much more complex than that." Winter throws the gruel in his lap, furious, he unbuckles his belt and tries to rape her. She takes his gun, and holds it on him. He will not declare himself "a turd", as Valerie Solanas would have had him say. She shoots him through the head.

In the inner sanctum, a clown-masked Kai bids "bring the betrayers" to him as the cultists chant "my ruler". A hooded Beverly and Rudy are led in. Rudy begs to be set free, but admits that he's trying to get Kai healthier. Kai reveals that Rudy created the "pinky-power" ritual, Kai engages Rudy in the ritual, and Winter steps in and severs Rudy's pinky, unmasking herself a moment later. Kai follows through, slashing Rudy's throat before Rudy is dragged away. Beverly asks what she did. Winter told Kai that Beverly was the one to kill Samuels, which Beverly declares a lie. Beverly calls him an insecure, incompetent attention whore. He says that death is too good for her, and instructs to take her to the isolation chamber. He addresses the assembled and welcomes the newest member as Ally unmasks herself (to Ivy's horror) as the new Satanist clown.

Perry Donner-Scott is a guest starring character in American Horror Story portrayed by actor Joseph Will. Perry declined one of Kai's motions but he quickly changed his mind when Kai started threatening his daughters. Perry and Kai later got into a debate about a motion but Kai made it pass. Kai and Perry also argued about another debate but Perry won't give in but Kai passes it.

Winter of Our Discontent
Pastor Charles is a guest starring character in American Horror Story, portrayed by actor Rick Springfield.

He was an ultra-conservative priest based out of Wixom, MI who fatally punished those he considered sinners, such as drug addicts, homosexuals, and women who had abortions. On October 2015, his wrongdoings were intercepted by Kai and Winter Anderson, who rescued his victims from further torture and entrapped him in one of his own devices, killing him. His death would have significant mental scarring on Kai, who would soon after begin to see the world as a place where not everyone can be saved. 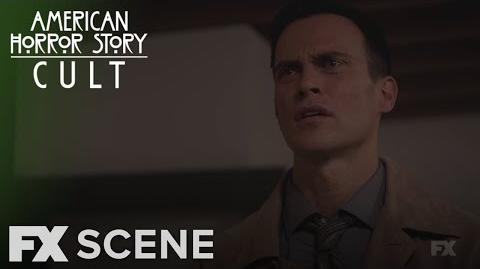